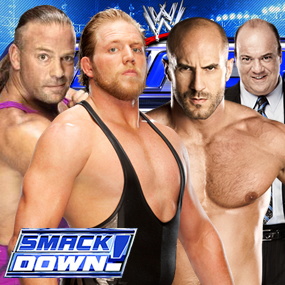 Paul Heyman joins Michael Cole and JBL at the announce desk and reveals this Sunday at Extreme Rules will be a Triple Threat Elimination Match!

In ECW days, they called it a Three Way Dance. An elimination match featuring three men battling at once. This Sunday at WWE Extreme Rules, such a match will take place as RVD will collide with Jack Swagger and they will collide with Cesaro! On WWE Smackdown, the situation came to a head, as reported by the fine journalists as WWE.com:

With Cesaro and Paul Heyman joining the SmackDown announce team, Rob Van Dam and Jack Swagger competed in a hard-hitting bout. When the action spread outside the ring, an impulsive Swagger took full advantage of his close proximity to The King of Swing, knocking his former tag team partner to the ground with a powerful attack.

Paul Heyman’s client got quick retribution, however, distracting The Real American enough for RVD to hit the Five-Star Frog Splash for the win. The Swiss Superstar capped off his momentum-building moment by cutting short his Extreme Rules opponent’s victory celebration and nailing a Neutralizer on Mr. Monday Night.

Of course, we’re HustleTweeting about RVD vs Swagger vs Cesaro and you’re more than welcome to join the conversation by writing us on twitter HERE or write to us directly at hustleoncrave@gmail.com Hey, have you checked out the Hustle’s Ultra High Quality You Tube Channel, with exclusive videos featuring OUR WORLD EXCLUSIVE WITH MIKE TYSON … BROCK LESNAR’S “HERE COMES THE PAIN” … ICE-T AND COCO’s SEX SECRETS … MMA BAD BOY NICK DIAZ … the list goes on and on, so if you’re not subscribing, you’re missing something … and by the ways cheapos, it’s FREE! Yes, absolutely 100 percent FREE! What are you waiting for? Check it out HERE!

CLICK ON THE PICS BELOW TO SEE THE ENTIRE GALLERY!

PAUL HEYMAN DROPS BY FOR COMMENTARY ON WWE SMACKDOWN! 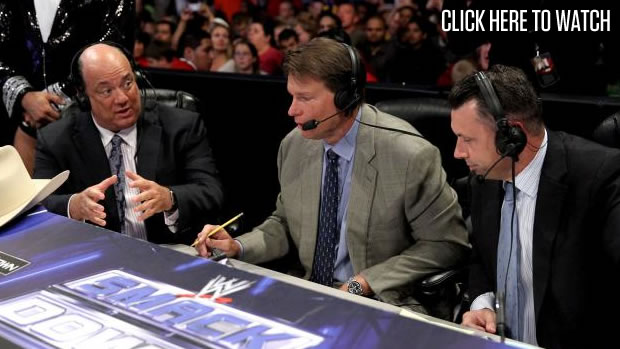