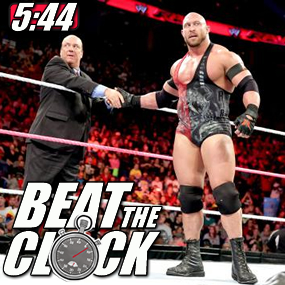 Our very own Hustler De Tuti Hustlers encourages Ryback to finish off R Truth as quickly as possible as the stakes are very high for WWE Hell in a Cell!

Earlier in the evening, RAW GM BRAD MADDOX DECIDED “BEAT THE CLOCK” WAS THE BEST WAY TO DETERMINE WHO NAMED THE STIPULATIONS FOR WWE HELL IN A CELL when Ryback gets his rematch against CM Punk. It was at WWE BATTLEGROUND when Punk used a back-kick to the groin to survive a beat down from Ryback, so choosing the stipulations is all-important. According to WWE.com:

There are no two ways about it: A lot was riding on Ryback and CM Punk’s dueling Beat the Clock Challenges. With the chance to pick the stipulation of the Punk-Ryback rematch at Hell in a Cell at stake, the margin for error was small for Paul Heyman’s humungous minion, and “The Big Guy” certainly came through in the clutch with a brutish defeat of a wily R-Truth. The former U.S. Champion’s battle plan was, as it turned out, to not even battle. Truth buzzed around Ryback like a fly, picking at “The Big Guy” before ducking under the ropes and high-fiving the WWE Universe to milk the clock and give his buddy Punk an easy time to beat. Heyman’s timely interference all but handed Truth to Ryback on a platter but Truth refused to give in till the very end, fighting Ryback tooth and nail until he finally fell to Shell Shocked at 5:44.

Of course, we’re HustleTweeting about WWE Hell in a Cell, and you’re more than welcome to join our conversation by following THE HEYMAN HUSTLE and telling us what YOU think RIGHT F’N HERE! We got the whole social media thing covered, so check out the Hustle’s Ultra High Quality You Tube Channel, with exclusive videos featuring OUR WORLD EXCLUSIVE WITH MIKE TYSON … BROCK LESNAR’S “HERE COMES THE PAIN” … ICE-T AND COCO’s SEX SECRETS … TEEN SENSATION TAYLOR MOMSEN … UFC BAD BOY NICK DIAZ … THE WALKING RIOT MISSY HYATT if you’re not subscribing, you’re missing something … and by the ways cheapos, it’s FREE! Yes, absolutely 100 percent FREE! What are you waiting for? Check it out HERE!

CLICK ON THE PICS BELOW TO SEE THE OFFICIAL WWE PHOTO
GALLERY FEATURING RYBACK’S DOMINANT VICTORY OVER R TRUTH IN 5:44!

CHECK OUT ALL THE ACTION HERE! 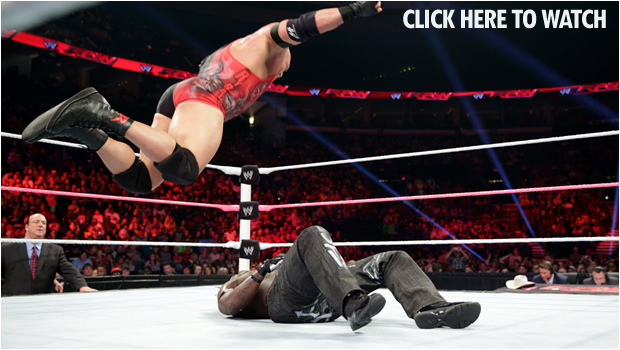