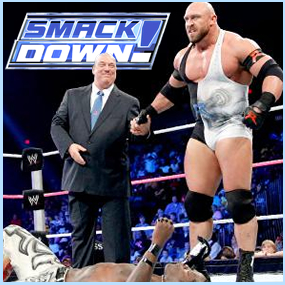 With both Intercontinental Champion Curtis Axel and our very own Hustler De Tuti Hustlers Paul Heyman witnessing the action from ringside, Ryback puts a beating on R Truth during this week’s WWE Smackdown!

This Sunday, Intercontinental Champion Curtis Axel will defend his title against R Truth, who scored a non-title victory over Axel on WWE Monday Night RAW (to see what happened, CLICK HERE). So Paul Heyman (who was part of ONE OF THE MOST SHOCKING MOMENTS IN THE HISTORY OF WWE on Monday) had Ryback oppose Truth on Smackdown. According to WWE.com:

With Paul Heyman at ringside, Ryback decimated R-Truth on the blue brand, putting down a potential comeback by The Rapping Superstar with Shell Shocked.

But the destruction didn’t stop there, as Intercontinental Champion Curtis Axel emerged to kick Truth while he was down, softening up his challenger ahead of their WWE Battleground match with the Intercontinental Title on the line.

Later, speaking on behalf of his two charges, Curtis Axel and Ryback, Paul Heyman first addressed R-Truth, then turned his attention to CM Punk, and promised losses for both Superstars at WWE Battleground.

Of course, we’re HustleTweeting about this Sunday’s WWE Night of Champions, and you’re more than welcome to join our conversation by following THE HEYMAN HUSTLE and telling us what YOU think RIGHT F’N HERE! We got the whole social media thing covered, so check out the Hustle’s Ultra High Quality You Tube Channel, with exclusive videos featuring OUR WORLD EXCLUSIVE WITH MIKE TYSON … BROCK LESNAR’S “HERE COMES THE PAIN” … ICE-T AND COCO’s SEX SECRETS … TEEN SENSATION TAYLOR MOMSEN … UFC BAD BOY NICK DIAZ … THE WALKING RIOT MISSY HYATT if you’re not subscribing, you’re missing something … and by the ways cheapos, it’s FREE! Yes, absolutely 100 percent FREE! What are you waiting for? Check it out HERE!

CLICK ON THE PICS BELOW TO SEE THE ENTIRE OFFICIAL WWE GALLERY! 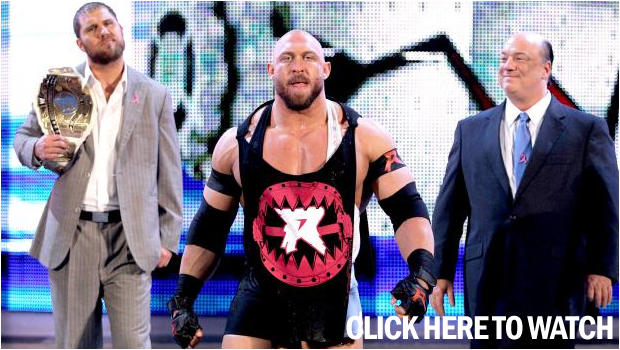