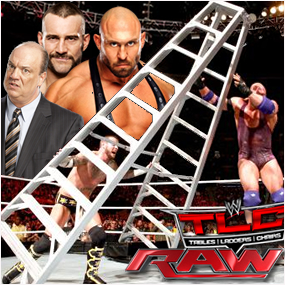 CM Punk is still the undisputed reigning defending WWE Champion, and he will head into The Royal Rumble against The Rock, as The Shield enabled Chicago’s favorite PAUL HEYMAN GUY to escape this brutal TLC Match with the championship!

It was a long time coming, but WWE Champion CM Punk finally faced feeding time in the Tampa Bay Times Forum, battling Ryback one-on-one in a Tables, Ladders & Chairs Match for Punk’s WWE Title that was originally slated to go down at WWE TLC in December. Punk’s unexpected trip under the knife delayed the contest for a full month, but with The Straight Edge Superstar cleared by WWE medical officials, the champion’s brief reprieve from his ravenous challenger was finally at an end.

And make no mistake, Ryback was nothing if not very, very hungry when he finally stepped into the ring against Punk. Ryback literally came out swinging against the champion, tenderizing Punk with body shots and vicious blows from the steel steps, but Punk took advantage of the unique stipulation to fortify his counterattacks. Punk battered Ryback with chair strikes to soften him up for his signature kicks, but Ryback had a similar strategy. He matched Punk shot-for-shot with his own chair and, at one point, delivered a bone-crunching suplex to Punk that drove the champion, back-first, onto a prone ladder.

Punk rallied from the brutal assault to set up a ladder in the center of the ring, but Ryback seemed to irrevocably take control of the bout when he slammed Punk atop the ladder and then dropped him through a table, leaving the champion incapacitated and the title within reach. But right when the beast scaled the ladder, the arena lights cut out. When the lights returned, they revealed The Shield, who stormed the ring. The trio unleashed a beating on Ryback, executing the triple powerbomb and allowing Punk to scale the ladder unscathed. Against all odds, the WWE Champion survives, extending his historic reign by yet another day. Next stop: the Royal Rumble.

Of course, we’re HustleTweeting about CM Punk vs Ryback, and you’re more than welcome to join the conversation by join the conversation by following us on twitter HERE or write us directly at hustleoncrave@gmail.com  Hey, have you checked out the Hustle’s Ultra High Quality You Tube Channel, with exclusive videos featuring OUR WORLD EXCLUSIVE WITH MIKE TYSON … BROCK LESNAR’S “HERE COMES THE PAIN” … ICE-T AND COCO’s SEX SECRETS … TEEN SENSATION TAYLOR MOMSEN … UFC BAD BOY NICK DIAZ … THE WALKING RIOT MISSY HYATT if you’re not subscribing, you’re missing something … and by the ways cheapos, it’s FREE! Yes, absolutely 100 percent FREE! What are you waiting for? Check it out HERE!

CLICK ON THE PICS BELOW TO SEE THE ENTIRE OFFICIAL WWE
PHOTO GALLERY FEATURING CM PUNK VS RYBACK IN A TLC MATCH ON RAW!

HIGHLIGHTS OF THE CM PUNK VS RYBACK TLC MATCH FROM WWE RAW! 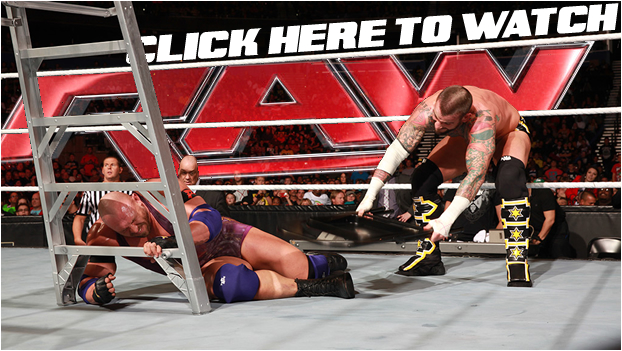