CM Punk Balls Out a Victory Over Ryback at WWE Battleground 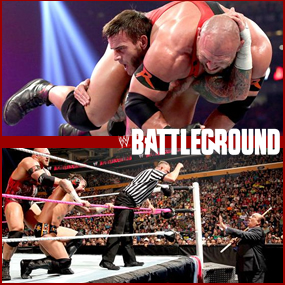 Our very own Hustler De Tuti Hustlers Paul Heyman’s plan to get involved in the Punk vs Ryback grudge match backfires … with a swift back kick from Punk to Ryback!

WWE Battleground was the setting for the latest in the epic battle between two former best friends, CM Punk and our boss Paul Heyman. This was a night in which Punk managed not only to survive, but to test Ryback’s manhood in a most uncomfortable way! According to WWE.com:

BUFFALO, N.Y. – Brutalized for weeks at the hands of both Paul Heyman and his “big, bad, beautiful” protector, Ryback, CM Punk turned not to his fists but his mind to claim a hard-fought upset over the Superstar Heyman seems to have hand-picked his latest acolyte.

With Heyman positioned safely behind the man-mountain, Punk had no choice but to engage “The Big Guy” head-on and leave Heyman — whose “win” over Punk at Night of Champions has yet to be repaid — for another day. What Ryback lacked in technical precision he made up for in pure brute force: a man fighting not just for his own bragging rights against an old foe but the approval of a benefactor whose influence has already begun to poison Ryback’s mind. It was, after all, Heyman who planted the idea of Punk-as-bully into Ryback’s head, despite the fact that The Human Wrecking Ball has doled out harrassment to Superstars and civilians alike over the last several months.

The strategy went about as well as one would expect for The Second City Saint at the outset when he found himself muscled into the defensive by his much larger foe. With Heyman whispering words of encouragement into his guardian angel’s ear to reinforce their mission — “he’s a bully” — Ryback deployed a monstrous combination of power moves that all but turned Punk into a splatter.

Even though Heyman instructed his protégé to “hurt” the staggering Punk, The Second City Saint found his second wind, writhing free of Ryback’s rear chinlock and raining elbows upon the big man’s skull. Punk next planted Ryback with a swinging neckbreaker and signaled for the Go to Sleep, though Heyman cut the attack short by deploying the most efficient weapon in his arsenal: His mouth. With Punk moments from victory, the mad scientist seized a microphone and reiterated (in great detail) his ill-gotten victory at Night of Champions, distracting Punk long enough for Ryback to level him with the Meathook Clothesline.

As the bout neared its fever pitch, both men reached deep into their caches to put the other away, and Punk, again, hung just tough enough to keep it close. Ryback turned to the powerbomb as his maneuver of choice, and The Straight Edge Superstar transitioned into a hurricanrana to counteract it. Ryback answered by muscling Punk chest-first into the ropes, and that’s when Heyman lost his cool.

Unable to resist a chance at humiliating his prodigal son, Heyman slowly skulked toward the prone Punk with a Kendo stick while Ryback occupied the referee. But the intent — while appropriately vindictive — wasn’t exactly subtle, and with the ref now distracted by Heyman, Punk performed the match’s brutal coup de grace by mule-kicking Ryback right in the groin. As Heyman realized his folly, Punk quickly covered the shell-shocked “Big Guy” with a smile and completed his win with the 1-2-3.

So, to recap: in one fell swoop, CM Punk outsmarted Paul Heyman, defeated Ryback, and left his former mentor stewing on pay-per-view. It was a textbook win that proved true everything CM Punk has said about himself, and left Heyman to sit and ponder what might have been had he truly acted like the mastermind he calls himself. For Heyman, it was a missed opportunity. For Punk, it was mind over muscle, strategy over brutality, student over teacher. It was big, it was bad and it was beautiful.

As for Ryback? Well, now he knows what happens to bullies.

Of course, we’re HustleTweeting about WWE Battleground, and you’re more than welcome to join our conversation by following THE HEYMAN HUSTLE and telling us what YOU think RIGHT F’N HERE! We got the whole social media thing covered, so check out the Hustle’s Ultra High Quality You Tube Channel, with exclusive videos featuring OUR WORLD EXCLUSIVE WITH MIKE TYSON … BROCK LESNAR’S “HERE COMES THE PAIN” … ICE-T AND COCO’s SEX SECRETS … TEEN SENSATION TAYLOR MOMSEN … UFC BAD BOY NICK DIAZ … THE WALKING RIOT MISSY HYATT if you’re not subscribing, you’re missing something … and by the ways cheapos, it’s FREE! Yes, absolutely 100 percent FREE! What are you waiting for? Check it out HERE!

CLICK ON THE PICS BELOW TO SEE THE ENTIRE OFFICIAL WWE
PHOTO GALLERY FEATURING CM PUNK VS RYBACK FROM BATTLEGROUND!