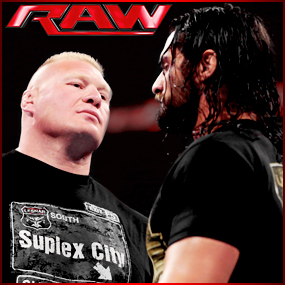 The Conqueror and Paul Heyman Return to WWE Monday Night RAW as The Authority Decides to Test The Current Champion’s Greatness!

Brock Lesnar and Paul Heyman are back, and reigning WWE World Heavyweight Champion Seth Rollins is none too happy about it! After the closest of close victories over Dean Ambrose in a Ladder Match at WWE Money in the Bank, Rollins wanted to know who his next opponent was as WWE Monday Night RAW went live from Cleveland, Ohio. After waiting the entire program for the answer, Rollins found out he would come face-to-face with The Beast at WWE Battleground on Sunday, July 19th from the Scottrade Center in St Louis, Missouri.

After successfully defending his WWE World Heavyweight Championship against Dean Ambrose at WWE Money in the Bank, Seth Rollins confidently proclaimed himself the greatest WWE Champion of all time. However, at WWE Battleground, “the best” will finally have to go head-to-head with The Beast.

Rollins has unquestionably proven his mettle since cashing in his Money in the Bank contract during Brock Lesnar’s WrestleMania 31 match against Roman Reigns to capture his first WWE World Heavyweight Championship. Defeating the likes of Reigns, Randy Orton and most recently, The Lunatic Fringe, Ambrose, in an awe-inspiring Ladder Match at Money in the Bank, there is no doubting The Architect’s toughness, or his knack for defending his title by any means necessary.

But amid all his victories and achievements over the past four months, one question has lingered: What would happen when The Beast Incarnate finally returned from his indefinite suspension?

The last time we saw Brock Lesnar, he was not in the greatest of moods. Furious over having his WWE World Heavyweight Championship “stolen” the night of WrestleMania, Lesnar invoked his rematch clause on WWE’s flagship show. However, when Rollins refused an immediate return showdown, the brutal Superstar exploded, attacking commentators and cameramen alike while paying no heed to the pleas made by his advocate, Paul Heyman. Subsequently, The Authority suspended Lesnar indefinitely for his actions, and he had not been seen on WWE programming since – until now.

The former four-time WWE World Heavyweight Champion seems as focused as he has ever been, still having not been pinned or made to submit since breaking The Undertaker’s Streak at WrestleMania 30. Lesnar will seek to continue that unwavering dominance against The Authority’s chosen one at WWE Battleground.

What will happen when these two Superstars collide? Can Rollins orchestrate the most monumental win of his WWE career by defeating The Beast and truly cement himself as the best that the WWE has to offer? Or will the Mayor of Suplex City conquer Rollins and firmly regain both the championship and his position atop the WWE Universe? 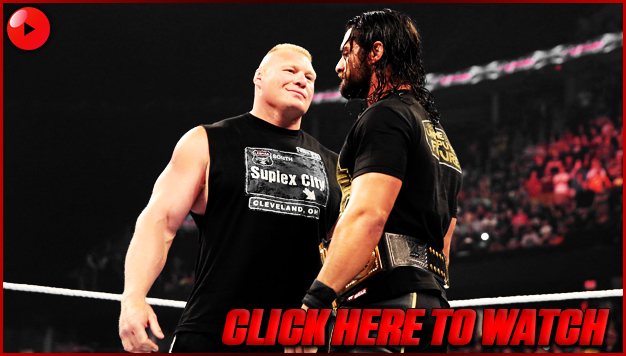