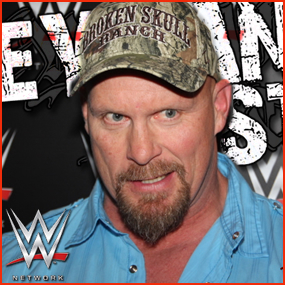 THE HEYMAN HUSTLE is on hand at The Wynn in Las Vegas as the world’s number one sports entertainment content provider makes the most important announcement in the company’s storied history!

Las Vegas, Nevada — WWE made a big impression at CES as the world’s leading sports entertainment promotion stayed ahead of the curve with the roll out of the WWE Network. Hustle photog Bob Mulrenin was on hand to grab these EXCUSIVE PHOTOS of the multi-time WWE Champion (and The Attitude Era’s greatest box office attraction) Stone Cold Steve Austin!

The official press release on the roll-out from WWE read:

WWE Network, the first-ever 24/7 streaming network, will launch live in the U.S. on Monday, February 24, featuring all 12 WWE live pay-per-view events – including WrestleMania® – valued at more than $600 per year for $9.99 per month with a 6-month commitment. WWE Network will also include groundbreaking original programming, reality shows, documentaries, classic matches and more than 1,500 hours of video on demand at launch.

Fans can subscribe to WWE Network beginning at 9 am ET on Monday, February 24 at WWE.com, and for a limited time will be offered a free one week trial. WWE Network, the first 24/7 network delivered directly to fans through over-the-top digital distribution, will be available on desktops and laptops via WWE.com. WWE Network will also be available through the WWE App on: Amazon’s Kindle Fire devices; Android devices such as Samsung Galaxy; iOS devices such as Apple iPad and iPhone; Roku streaming devices; Sony PlayStation®3 and Sony PlayStation® 4; and Xbox 360. Availability on additional devices, including Xbox One and select Smart TVs, will follow this summer.

“Today is a historic day for WWE as we transform and reimagine how we deliver our premium live content and 24/7 programming directly to our fans around the world,” said Vince McMahon, WWE Chairman & Chief Executive Officer. “WWE Network will provide transformative growth for our company and unprecedented value for our fans.”

MLBAM has been at the forefront of streaming technology for more than a decade, powering its own live video subscription product since 2002. Last year, MLBAM managed live video content for more than 25,000 events, covering 80,000 hours of broadcast programming, across its sports and entertainment partners.

“We applaud WWE for this bold, timely and strategic move to fully optimize the power and potential of live entertainment,” said Bob Bowman, President and CEO, MLBAM. “We are proud to work with WWE to help provide its millions of loyal fans with unencumbered access to distinctive and engaging live content across the devices they use most.”

WWE Network is scheduled to launch in the United Kingdom, Canada, Australia, New Zealand, Singapore, Hong Kong and the Nordics by the end of 2014/early 2015.
Of course, we’re HustleTweeting about WWE Network, and you’re more than welcome to join the conversation by following THE HEYMAN HUSTLE on Twitter HERE or write to us directly at hustleoncrave@gmail.com  Hey, have you checked out the Hustle’s Ultra High Quality You Tube Channel, with exclusive videos featuring OUR WORLD EXCLUSIVE WITH MIKE TYSON … BROCK LESNAR’S “HERE COMES THE PAIN” … ICE-T AND COCO’s SEX SECRETS … TEEN SENSATION TAYLOR MOMSEN … UFC BAD BOY NICK DIAZ … THE WALKING RIOT MISSY HYATT if you’re not subscribing, you’re missing something … and by the ways cheapos, it’s FREE! Yes, absolutely 100 percent FREE! What are you waiting for? Check it out HERE!

CLICK ON THE PICS BELOW TO SEE THE ENTIRE EXCLUSIVE PHOTO GALLERY
FEATURING STONE COLD STEVE AUSTIN AT THE CES CONVENTION IN LAS VEGAS!