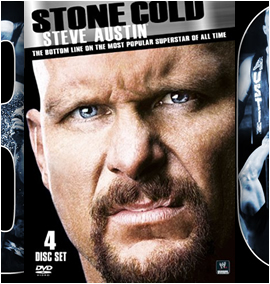 Full Details on the Hottest DVD Release of the Holiday Season!

WWE’s “Stone Cold – The Bottom Line on The Most Popular Superstar of All Time”, which features exclusive new interviews with our own Hustler De Tuti Hustlers Paul Heyman, has been released on DVD and Blu-Ray.

CLICK HERE TO ORDER “STONE COLD – THE BOTTOM LINE ON THE MOST POPULAR SUPERSTAR OF ALL TIME!”

The hype for this release states At his apex, “Stone Cold” Steve Austin was a pop culture phenomenon, the biggest Superstar in the history of sports-entertainment. Despite battling the rejection of being  fired and a career-threatening injury, Austin persevered and vaulted to the top of his profession. Now, fans can relive the epic story of the Texas Rattlesnake with Stone Cold Steve Austin. Filled with new, never-before-seen insightful interviews with “Stone Cold” as well as his biggest rivals, including Mr. McMahon, Bret “Hit Man” Hart, Shawn Michaels, Triple H, Chris Jericho, and more, this DVD is packed with “Stone Cold’s” most memorable moments and matches and provides a complete career retrospective on the man who revolutionized WWE.