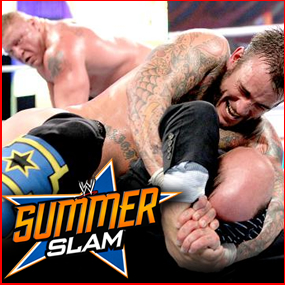 Our very own Hustler De Tuti Hustlers Paul Heyman gets trapped in the Anaconda Vice, but The Beast takes advantage of the No Disqualification stipulation and destroys The Best In The World with a steel chair!

WWE’s historic presentation of SummerSlam 2013 from the Staples Center in Los Angeles, California saw The Beast Incarnate Brock Lesnar defeat The Best in the World CM Punk in a Battle of the Paul Heyman Guys … and in a match that will forever be etched into the minds of those who were privileged enough to witness it.

Blinded by rage, CM Punk succeeded in getting his hands on Paul Heyman at SummerSlam, but his vengeance came at a price — in this case, at the sacrifice of victory against Brock Lesnar.

After going to hell and back with The Anomaly in a No Disqualification Match that lived up to its grandiose “Best vs. The Beast” billing in every way, Punk fell prey to a vicious F-5 onto a steel chair, a brutal impact that interrupted The Best in the World’s attempt to make Heyman squeel in pain.

The bout was nothing short of remarkable, a supremely barbaric affair that ravaged the ringside area and left the sold-out STAPLES Center breathless. The addition of the No Disqualification stipulation, agreed to by both individuals, was proposed by Heyman and revealed on the Kickoff event immediately preceding the pay-per-view broadcast. Ultimately, the eleventh-hour curveball was perhaps  Punk’s undoing, as Heyman repeatedly broke up pin and submission attempts that appeared seconds away from doing the unthinkable: slaying The Beast Incarnate.

The action started at a breakneck pace, with Lesnar outmuscling his smaller foe and focusing his punishing offense on Punk’s ribs, not yet completely healed from The Beast’s attack on Raw weeks ago. Despite speculation among certain segments of the WWE Universe that Punk would be wholly overmatched, however, The Best in the World proved completely fearless, and his never-say-die spirit, galvanized by the decidedly pro-Punk fans in attendance, allowed him to survive maneuvers that would have undoubtedly downed most Superstars.

Lesnar tossed Punk onto tables, slammed his body with a steel chair and rocketed him overhead with a belly-to-belly suplex on the floor. The farm-strong Lesnar placed a table cover over a prone Punk and leapt on him. A lariat that landed on Punk’s jaw and neckline prompted Michael Cole to describe the scene as a “sickening assault.”

Of course, we’re HustleTweeting about #BestVsBeast and you’re more than welcome to join us by following us on twitter HERE or write us directly at hustleoncrave@gmail.com  Hey, have you checked out the Hustle’s Ultra High Quality You Tube Channel, with exclusive videos featuring OUR WORLD EXCLUSIVE WITH MIKE TYSON … BROCK LESNAR’S “HERE COMES THE PAIN” … ICE-T AND COCO’s SEX SECRETS … TEEN SENSATION TAYLOR MOMSEN … UFC BAD BOY NICK DIAZ … THE WALKING RIOT MISSY HYATT if you’re not subscribing, you’re missing something … and by the ways cheapos, it’s FREE! Yes, absolutely 100 percent FREE! What are you waiting for? Check it out HERE!

CLICK ON THE PICS BELOW TO SEE THE ENTIRE OFFICIAL WWE PHOTO
GALLERY OF #BESTvsBEAST FROM SUMMERSLAM 2013 IN LOS ANGELES!