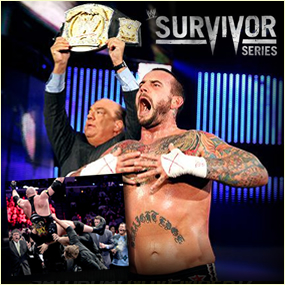 Our Very Own Hustler De Tuti Hustlers Paul Heyman Leads The #BestInTheWorld to Victory in a Controversial Triple Threat Match, Surviving the Challenge of John Cena and Ryback!

WWE Survivor Series was headlined by WWE Champion CM Punk (who was accompanied by our very own Hustler De Tuti Hustlers Paul Heyman) defending the championship on day #364 of his title reign against the challenge of John Cena and Ryback.

Sneaking away with a victory over John Cena and Ryback in a Triple Threat Match at Survivor Series, the WWE Champion continued his extraordinary, and now yearlong, title reign by the very skin of his teeth. And yet, things may have turned out very differently had it not been for the outside involvement of three individuals who aided The Straight Edge Savior when he needed it most. Targeting the mighty Ryback in the closing moments of this brutal battle, WWE NXT competitors Dean Ambrose, Seth Rollins and Roman Reigns attacked the powerful competitor like rabid dogs before smashing him through an announce table — the second one Ryback crashed through that night. Flagrant assault allowed the WWE Champion to pin a downed Cena, and raised endless questions about their involvement in the main event that remain unanswered.

One thing is certain, though: Ambrose, Rollins and Reigns changed the course of WWE history at Survivor Series.

You are cordially invited to join the HustleTweeters (or even become one) by following THE HEYMAN HUSTLE on Twitter HERE or write to us directly at hustleoncrave@gmail.com  Hey, have you checked out the Hustle’s Ultra High Quality You Tube Channel, with exclusive videos featuring OUR WORLD EXCLUSIVE WITH MIKE TYSON … BROCK LESNAR’S “HERE COMES THE PAIN” … ICE-T AND COCO’s SEX SECRETS … TEEN SENSATION TAYLOR MOMSEN … UFC BAD BOY NICK DIAZ … THE WALKING RIOT MISSY HYATT if you’re not subscribing, you’re missing something … and by the ways cheapos, it’s FREE! Yes, absolutely 100 percent FREE! What are you waiting for? Check it out HERE!

CLICK ON THE PICS BELOW TO SEE THE OFFICIAL WWE PHOTO GALLERY
OF THE PUNK VS CENA VS RYBACK WWE TITLE MATCH AT SURVIVOR SERIES! 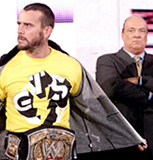 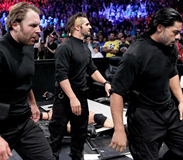 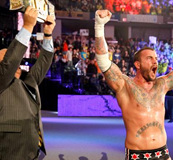