The Champ Is Here ... At The NBA Playoffs! 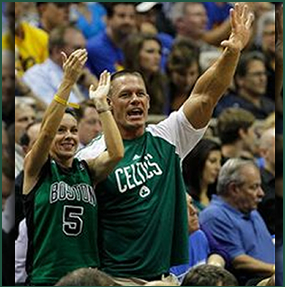 WWE Champion John Cena and his wife were wearing the team colors –the Boston Celtic team colors–  at the Amway Arena in Orlando, Florida as the Celtics took on the Orlando Magic in  Game Two of the NBA Eastern Conference Finals.

It’s nice to know Cena, regarded by our own Hustler De Tuti Hustlers Paul Heyman as the hardest working performer in professional wrestling, actually took a night off … only to get swarmed by the paparazzi at the game!

In an blog posted in THE SUN (UK), Paul wrote "Cena is a workhorse. He’s a tireless promotional machine. And the project, event, DVD, pay per view, film, CD, and merchandise he promotes are all branded "WWE".

There’s not one single wrestler I’ve met in the past two decades with Cena’s drive, ambition and determination to give every fibre of his existence to the company. Triple H may have married into the 24/7 life of a McMahon Family member, but he likes to go home every now and then. Hey, he has two daughters with Stephanie. I’m not knocking him. My willingness to travel non-stop ended when I became a father as well.

But while I’m not knocking HHH, I am pointing out a fact.

If a radio interview needs to be done in the UK, which is five hours ahead of the North-eastern USA, and that interview needs to be done at 3:30am, Triple H is not going to be inclined to jump on the phone and be excited about the opportunity to engage in the conversation.  Cena, on the other hand, salivates at the opportunity.  John Cena is Vince McMahon’s dream pro wrestler."