The REAL Inside Story Behind Playboy's Amazing Decision To Drop Nudes From Its Magazine ... and What The Media Has NOT Told You 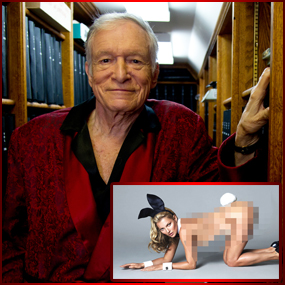 It was a report that, at times, seemed like a Facebook hoax. On Monday, The New York Times ran a story breaking the news that Playboy Magazine was going to stop publishing images of naked women. It was, on surface, a fascinating report, one which propelled Playboy CEO Scott Flanders into the headlines. For the first time anyone could remember, Playboy Founder Hugh M. Hefner was not the one credited with making a monumental decision in regards to Playboy both magazine and enterprises.

And make no mistake about it, this story is not just about Playboy magazine. It’s about the brand. It’s about the corporation. And Playboy is far from getting out of the nudity exploitation business. We’re not passing judgment whatsoever. We’re just showing you the inside moves that led to the decision, and what the decision really means, not what an ignorant media thinks it means.

Quietly, Playboy has already tested out this strategy on its own website, which you may be surprised to learn has been sans nude women since last year. Playboy claims it’s been a big success, and that the move has actually attracted a much bigger and younger audience.

Therefore, test run complete, as of March 2016, there won’t be any explicit nude images of women in the US edition of Playboy Magazine.

In 1953, editor/publisher Hugh M. Hefner’s Playboy Magazine made its mark by being one of the first mainstream magazines to feature pictures of nude women. In the pre-internet era, what people labeled porn was a lot harder to obtain, so there was a big market for what people would consider pornographic magazines. The magazine grew to more than 5 million subscribers by the 1970s and became the standard bearer in a world that included Penthouse and Hustler. The internet, of course, changed everyone’s lives, especially those in the adult industry, as any search online will produce millions of naked images, making it even more difficult for Playboy to ask for almost twenty dollars a year for a subscription. The magazine currently has approximately 800,000 subscribers.

Playboy, however, has always tried to be as much about the articles as much as it’s about the naked women. Over the decades, those 5 million subscribers allowed Playboy to have access to A-Listers who would be interviewed by the magazine such as President Jimmy Carter, Steve Jobs, Dr Martin Luther King Jr, Malcolm X, The Beatles …

So, now Playboy will adopt the #HustleBootyTempTats formula and go with sexy but not nude photos, and will hire a stronger editorial staff to cover hot button issues and controversial topics.

Flanders, last year, shocked long time Playboy enthusiasts when he publicly stated  “You could argue that nudity is a distraction for us and actually shrinks our audience rather than expands it.”

“His thought process was proven correct when it became apparent the decision to remove naked women from the website dramatically expanded the potential audience for Playboy.com  The nudity had Playboy blocked in places essential for commerce.” Apple’s App Store doesn’t allow apps to have sexually explicit imagery, for example, nor do Facebook or Instagram.

Playboy therefore re-launched Playboy.com with the non-nudes but uber-sexy photos (ahem, the #HustleBootyTempTats business model) and claims traffic quadrupled, and the average age of readers fell from 47 to the much-more-marketable prime 30 years old.

More traffic and a younger audience are big successes in their own right, but even more importantly, the shift helps make the Playboy brand more mainstream. There’s already a large demand for Playboy-branded merchandise, and Flanders claims that demand will grow even more if Playboy becomes less associated with what some people consider to be explicit pornography.

Flanders told The New York Times that the US edition of the magazine lost around $3 million last year. But Playboy’s efforts to cash in on its brand, and particularly its famous bunny logo, is paying off big. One of the biggest moves Playboy is making is into China, where last year Playboy-branded products generated a reported ONE AND A HALF BILLION DOLLARS in revenues. That’s approximately a third of the worldwide total for the brand. Playboy merch sells in 3,500 retail outlets in China (plus the hundreds more with bootleg knockoffs), which is amazing since China has a complete ban on what content or brands it considers to be “porn”.

Now here comes the part the media has failed to understand or is simply too lazy to report on and explain to its viewers or readers. While there will no longer be naked ladies in Playboy Magazine or at Playboy.com, but that’s not to say you won’t see nudity associated with Playboy. Permit us to explain this to you in detail.

Playboy‘s licensing agreement with MindGeek runs for 15 years, so that means Playboy might not get control back of those properties until 2026. So if Playboy becomes determined to separate itself fully from the business of presenting women in the nude, it might be able to cut a deal with MindGeek to end the deal early, or to choose a new brand name for its properties that feature naked women.

Playboy‘s battles have just begun, but the decision to drop nudes seems to be the biggest cultural shift (and Boogie Nights-level acknowledgement of a new era) Playboy has ever attempted.

Of course, we’re HustlreTweeting about Playboy’s Bold New Image and you’re more than welcome to join the conversation by following the Hustle on Twitter HERE or write to us directly at hustleoncrave@gmail.com Hey, have you checked out the Hustle’s Ultra High Quality You Tube Channel, with exclusive videos featuring the #HUSTLEBOOTYTEMPTATS SUPERMODEL OF THE YEAR … OUR WORLD EXCLUSIVE WITH MIKE TYSON … BROCK LESNAR’S “HERE COMES THE PAIN” … ICE-T AND COCO’s SEX SECRETS … MMA BAD BOY NICK DIAZ … the list goes on and on, so if you’re not subscribing, you’re missing something … and by the ways cheapos, it’s FREE! Yes, absolutely 100 percent FREE! What are you waiting for? Check it out HERE