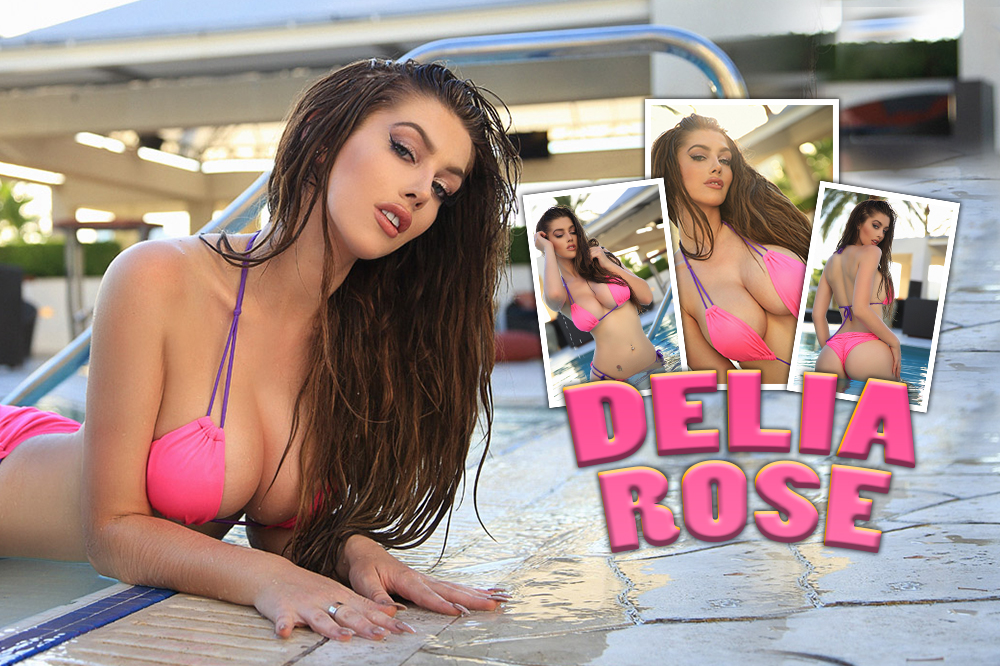 “You’re getting assigned the task of writing a story about Delia Rose” is something every male in The Looking4Larry Agency (parent company to THE HEYMAN HUSTLE)’s office was hoping to hear. Ever since we’ve been doing EXCLUSIVE photo shoots at the Hard Rock Hotel and Casino Las Vegas, we (100 percent of the male staff, and about 1/3 of the female staff) have been wondering when our boss Paul Heyman would schedule Delia for a shoot. The gorgeous brunette bombshell burst into the Twitterverse last year by immediately declaring herself a #PaulHeymanGirl, and you can bet your last dollar (or British pound, the choice is yours) that The Advocate noticed.

So when legendary London-based glamour photographer Mike Cohen (who was the first to bring Delia to everyone’s attention in the UK) announced he was heading to Vegas to do a number of EXCLUSIVE #HustleBootyTempTats photo shoots, our hopes were up.

And not one of us was disappointed to learn that first on the list of Mike’s subjects in Las Vegas was the single hottest swimsuit model in all of the UK, the self-proclaimed #PaulHeymanGirl, the model whose fans have flooded our @HeymanHustle Twitter Account, begging us to arrange a #HustleBootyTempTats photo shoot … DELIA F’N ROSE was on a plane to Las Vegas to shoot for THE HEYMAN HUSTLE!

So, as our boss would say, Ladies and Gentlemen … we here at THE HEYMAN HUSTLE are proud to present the very first (of many) EXCLUSIVE photo shoots with the undisputed queen of all Bikini Babes, the indescribable Delia Rose!

Oh, in case you’re wondering why Paul described writing this story as a task? “Good luck describing Delia Rose,” Paul laughed. “There’s no way you can write something that’s going to match how hot she looks in these photos!”

And so, once again, our boss has taught us all a lesson

But OMFG, what a wonderful lesson it was to learn!

Please be sure to follow DELIA ROSE ON TWITTER, and don’t forget to check out the legendary MIKE COHEN ON TWITTER, too. Of course, we’re HustleTweeting about Delia, and we can’t wait to RT your thoughts on this photo shoot, so please feel free to join the conversation on the Hustle Twitter HERE and also on our hyper-interactive Facebook page HERE!