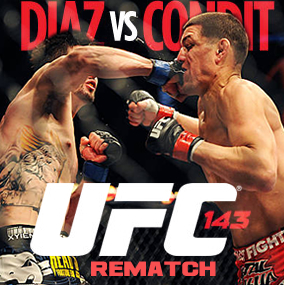 Details Are Sketchy But One Thing Is For Sure … UFC Has Scored a HUGE Main Event!

It’s been a wild week for UFC fans. So wild, that Our Own Hustler De Tuti Hustlers Paul Heyman was working all day on a blog (his first in quite some time) on the Nick Diaz Phenomenon (Paul is a huge Nick Diaz fan, as evident in THIS MEMORABLE EPISODE OF “THE HEYMAN HUSTLE“) when word broke that UFC was going to announce Diaz-Condit II.

Just earlier in the day on Tuesday, Condit’s manager Malki Kawa shot down the rumors of a Diaz-Condit rematch, saying “That rematch can happen later on in the future. No one’s afraid of Nick, but we have to do what’s best for his career and in my opinion and the people around me and the advice that we’ve been taking, the best fight and the only fight is Georges St-Pierre.”

No details of the rematch or the agreement to make it happen are available, but a hint may have been dropped when Zuffa confirmed on Tuesday that UFC on Fox 4 is now going happen on August  4th in Los Angeles. Is the lure of network tv too much for newly minted Interim Welterweight Champion Condit and Stockton Bad Boy Diaz to pass up?

We’re HustleTweeting about Diaz vs Condit, and you’re more than welcome to join the conversation by following THE HEYMAN HUSTLE on Twitter HERE or write to us at hustleoncrave@gmail.com

FOLLOW THE TIMELINE OF THE ENTIRE NICK DIAZ VS CARLOS CONDIT
ULTIMATE CONTROVERSY FROM UFC 143 IN LAS VEGAS!