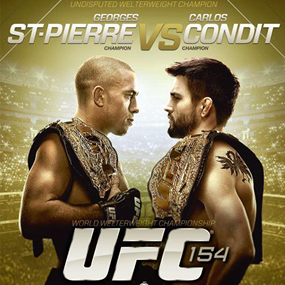 Welterweight Champion Georges St-Pierre Returns To The Octagon on November 17th, and Interim Champion Carlos Condit Will Be Waiting For Him!

UFC will return to the Bell Centre in Montreal (which was the home for A MOST HISTORIC EDITION OF WWE MONDAY NIGHT RAW FEATURING CM PUNK AND OUR OWN HUSTLER DE TUTI HUSTLERS PAUL HEYMAN) on Saturday night, November 17th, and hometown hero Georges St-Pierre long-awaited return to the Octagon will finally take place, as GSP hopes to once again become the Undisputed Welterweight Champion of the World by unifying the Welterweight Title and the Interim Welterweight Title when he fights Carlos Condit.

This match was originally scheduled to take place all the way back at UFC 137, but a knee injury forced GSP to get surgery in December. GSP’s last appearance in the Octagon was in April, 2011 when he defeated Jake Shields at UFC 129. That improved GSP’s amazing string of performances by marking his ninth consecutive victory and sixth straight title defense. CONDIT SCORED A CONTROVERSIAL DECISION OVER NICK DIAZ AT UFC 143 to become the Interim Champion.

CLICK HERE TO SEE THE OFFICIAL POSTER FOR UFC 154: ST-PIERRE VS CONDIT!

Of course, we’re HustleTweeting about GSP vs Carlos Condit, and you’re more than welcome to join the conversation by following THE HEYMAN HUSTLE on Twitter HERE or write to us directly at hustleoncrave@gmail.com  Hey, have you checked out the Hustle’s Ultra High Quality You Tube Channel, with exclusive videos featuring OUR WORLD EXCLUSIVE WITH MIKE TYSON … BROCK LESNAR’S “HERE COMES THE PAIN” … ICE-T AND COCO’s SEX SECRETS … TEEN SENSATION TAYLOR MOMSEN … UFC BAD BOY NICK DIAZ … THE WALKING RIOT MISSY HYATT if you’re not subscribing, you’re missing something … and by the ways cheapos, it’s FREE! Yes, absolutely 100 percent FREE! What are you waiting for? Check it out HERE!