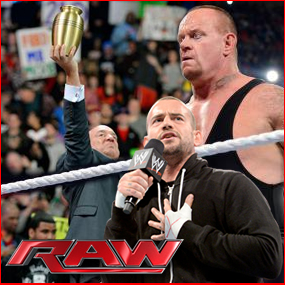 WWE Monday Night RAW was sold out in advance, and the citizens of the City of Brotherly Love witnessed #TheStreak vs #434 get very personal as The Phenom decided it was time to take back The Urn … but Punk and Heyman had other plans!

A highlight of RAW in the past few weeks has been the fact CM PUNK HAS URNed THE WRATH OF THE UNDERTAKER and things certainly heated up this week. As WWE heads into WrestleMania XXIX on April 7th, three big main events dominate the news. The Rock will defend the WWE Title against John Cena. Our very own Hustler De Tuti Hustlers Paul Heyman will manage two of the three main events, as he leads Brock Lesnar into battle against Triple H in a No Holds Barred Match which includes the stipulation TRIPLE H’s CAREER IS ON THE LINE … and he will also lead CM Punk to the ring against The Undertaker.

PHILADELPHIA — As WrestleMania 29 nears, it is apparent that CM Punk will not honor the classic adage and give the devil his due. The Straight Edge Superstar strolled into The City of Brotherly Love with Paul Bearer’s urn still in his possession and wasted no time in foretelling the downfall of The Undertaker.

Punk’s pre-emptive requiem for The Phenom might have been a bit too soon, because the arena lights cut out and The Lord of Darkness himself appeared in the ring, dropping Punk with minimal fanfare and no small amount of relish. The Undertaker’s attack knocked the urn loose, but his efforts to reclaim the talisman fell short when Paul Heyman snatched up the urn and fled to the locker room area with Punk on his heels. Still, in what may be the most personal contest in The Undertaker’s WrestleMania career, consider the first punch thrown.

Of course, we’re HustleTweeting about CM Punk vs The Undertaker at WrestleMania XXIX, and you’re more than welcome to join the conversation by following us on twitter HERE or write us directly at hustleoncrave@gmail.com  Hey, have you checked out the Hustle’s Ultra High Quality You Tube Channel, with exclusive videos featuring OUR WORLD EXCLUSIVE WITH MIKE TYSON … BROCK LESNAR’S “HERE COMES THE PAIN” … ICE-T AND COCO’s SEX SECRETS … TEEN SENSATION TAYLOR MOMSEN … UFC BAD BOY NICK DIAZ … THE WALKING RIOT MISSY HYATT if you’re not subscribing, you’re missing something … and by the ways cheapos, it’s FREE! Yes, absolutely 100 percent FREE! What are you waiting for? Check it out HERE!

CLICK ON THE PICS BELOW TO SEE THE ENTIRE OFFICIAL WWE PHOTO GALLERY
FEATURING THE UNDERTAKER, CM PUNK AND PAUL HEYMAN!

HIGHLIGHTS FROM CM PUNK AND PAUL HEYMAN’S INCIDENT WITH THE UNDERTAKER
DURING THIS WEEK’S EDITION OF MONDAY NIGHT RAW!