Beast vs Streak at WrestleMania? 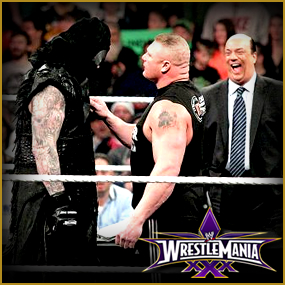 Paul Heyman came out to the ring with Brock Lesnar at the end of WWE Monday Night RAW to reject a counter-offer from Triple H and Stephanie McMahon. But before they could leave Green Bay on the night the WWE Network debuted, they were paid a visit from The Undertaker!

Brock Lesnar, despite his demands to the contrary, is not the No. 1 contender to the WWE World Heavyweight Championship. However, The Anomaly received the first-ever “open contract” to name his own opponent at WrestleMania 30. With Paul Heyman, as ever, acting as his mouthpiece, The Beast Incarnate condemned the offer as little more than a “consolation prize” for a Superstar who demanded nothing less than history to conquer.

Enter The Undertaker. The gatekeeper of WrestleMania’s sole, unbroken winning streak returned after nearly a year’s absence and got right in the face of The Beast Incarnate, to the overwhelming delight of a raucous live crowd in Green Bay. Lesnar immediately put pen to paper and offered The Deadman the opportunity to sign as well – which he did, in a fashion. The Phenom drove the pen through the back of Lesnar’s hand and chokeslammed him through a table, leaving him so dazed he refused to answer Renee Young’s questions on WWE Network’s Backstage Pass. Signed in blood and set for The Show of Shows. The devil himself couldn’t have asked for more.

Of course, we’re HustleTweeting about Beast vs Streak, and you’re more than welcome to join the conversation HERE or write to us directly at hustleoncrave@gmail.com  Hey, have you checked out the Hustle’s Ultra High Quality You Tube Channel, with exclusive videos featuring OUR WORLD EXCLUSIVE WITH MIKE TYSON … BROCK LESNAR’S “HERE COMES THE PAIN” … ICE-T AND COCO’s SEX SECRETS … MMA BAD BOY NICK DIAZ … the list goes on and on, so if you’re not subscribing, you’re missing something … and by the ways cheapos, it’s FREE! Yes, absolutely 100 percent FREE! What are you waiting for? Check it out HERE!

CLICK ON THE PICS BELOW TO SEE THE OFFICIAL WWE PHOTO GALLERY
FEATURING PAUL HEYMAN – BROCK LESNAR – AND THE PHENOM’S RETURN! 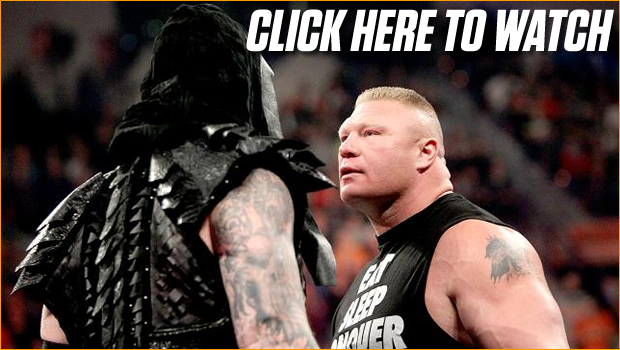