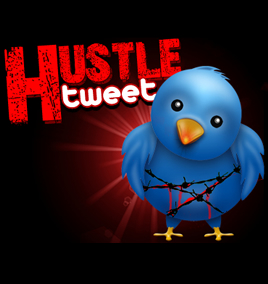 Uh oh! There’s trouble coming up ahead! Our own Hustler De Tuti Hustlers Paul Heyman has agreed to post some HustleTweets tonight, and since we’re sitting just a few feet away from him at the moment, we can tell you … he has that evil smile from ear to ear right now!

Don’t be left out! Come join the festivities! It’s bound to enlightening for all parties concerned! You can participate in the HustleTweeting HERE.

Well, Paul had a lot to say tonight.

Here’s a recap of the subjects tackled on our HUSTLETWEET page tonight:

In protest of WWE not using @JRsBBQ on Wmania, I am publicly declaring a boycott of the illegal feed of the next WWE ppv.

Oh shit. The next WWE is EXTREME RULES. We were going to have to boycott that one, anyway.

I’m just kidding every1. There is no boycott of EXTREME RULES. I hereby vow to watch the illegal feed. Shhhhhh … please dont tell Vince!

To answer all the questions, I will not be blogging on last night’s TNA Impact. What am I going to say that has not been said already?

OK, just one comment. Lacey Von Erich is hot. But there are better ways to use her … um … talents. OK, so that’s 2 comments.

OK, I cant resist. How many times can u beat up RVD and Jeff Hardy and not give them a "revenge-minded" interview afterwards?

Heels beat up babyfaces. Babyfaces swear revenge. People tune in. Holy shit! The formula is not that f’n complicated, people!

I don’t want any1 to think I am saying I know it all. I DON’T KNOW IT ALL. I still have a lot to learn.

I don’t know how to grow hair on top of my head.

I don’t know how to get six pack abs.

BUT I KNOW THAT IF A HEEL BEATS UP A POPULAR BABYFACE, THEN BABYFACE NEEDS A CHANCE TO PROMOTE THE TIME AND PLACE OF THE BABYFACE’S REVENGE

THE HEYMAN HUSTLE IS PLEASED AS PUNCH …
WAIT A MINUTE … WTF DOES "PLEASED AS PUNCH"
REALLY MEAN? WHO’S GETTING PUNCHED? SHOULDN’T
WE CHOKE SOMEONE OUT? SHOULDN’T IT BE "PLEASED
AS CHOKE?" AH, THESE ADJECTIVES ARE SO ANNOYING,
AREN’T THEY? WE HAVE 15 STORIES FOR YOU TO ENJOY.
PLEASE PICK A PIC AND CLICK … AND BE PLEASED AS PUNCH.
WHATEVER THAT MEANS.