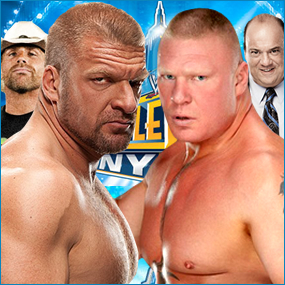 Triple H’s Epic War with Brock Lesnar Continues as HBK Shawn Michaels and our very own Hustler De Tuti Hustlers Paul Heyman Witness a Brutal Battle to the Finish in a No Holds Barred Match!

The nearly year-long feud between Brock Lesnar and Triple H is far from over, as The Game evened the score by scoring a pinfall over The Beast Incarnate at WrestleMania XXIX. Last August, BROCK FORCED TRIPLE H TO TAP OUT AT SUMMER SLAM, but at Mania, Triple H got his hand raised after HBK hit our boss Paul Heyman with Sweet Chin Music, and a brutal sequence that left even the most hardcore fan wondering how much more punishment either Triple H or Brock Lesnar could possibly take.

EAST RUTHERFORD, N.J. — Triple H had everything to lose in his No Holds Barred showdown with Brock Lesnar at WrestleMania 29: his dignity, his family’s honor, but most importantly, his legendary career in the squared circle. Risking it all to gain retribution on The Anomaly, The Cerebral Assassin was able to overcome Lesnar’s brute force and pummeling power, finally felling the mighty brawler with a devastating Pedigree onto steel steps, ensuring that his career in the squared circle will continue.

Both competitors were all-business as they approached the ring at sold-out MetLife Stadium. The Game had anger in his eyes, vividly recalling the two times Brock Lesnar broke his arm with the Kimura Lock. The vicious F-5 that left his father-in-law, Mr. McMahon, with a broken hip was fresh in Triple H’s mind as he rained blows down upon the massive mixed martial artist. Lesnar regained control of the bout early with vicious knees, though.

The ring couldn’t contain the two self-professed asskickers. The Game and Lesnar quickly spilled to the floor of MetLife Stadium, pummeling each other with anything and everything within arm’s reach. Triple H sent Lesnar crashing into the ringside barricade, and The Anomaly drove Triple H’s sternum into the announcers’ table in return.

Lesnar grabbed a chair minutes into the match, but The Cerebral Assassin evaded the steely blows. It was the furious NCAA Heavyweight Champion’s wrestling knowledge that earned him the advantage, gaining control with a big belly-to-belly suplex on the stadium floor.

Of course, we’re HustleTweeting about Brock Lesnar vs Triple H at WrestleMania, and you’re more than welcome to join the conversation by following us on twitter HERE or write us directly at hustleoncrave@gmail.com  Hey, have you checked out the Hustle’s Ultra High Quality You Tube Channel, with exclusive videos featuring OUR WORLD EXCLUSIVE WITH MIKE TYSON … BROCK LESNAR’S “HERE COMES THE PAIN” … ICE-T AND COCO’s SEX SECRETS … TEEN SENSATION TAYLOR MOMSEN … UFC BAD BOY NICK DIAZ … THE WALKING RIOT MISSY HYATT if you’re not subscribing, you’re missing something … and by the ways cheapos, it’s FREE! Yes, absolutely 100 percent FREE! What are you waiting for? Check it out HERE!

CLICK ON THE PICS BELOW TO SEE THE ENTIRE OFFICIAL WWE PHOTO GALLERY
FEATURING BROCK LESNAR VS TRIPLE H FROM WRESTLEMANIA!