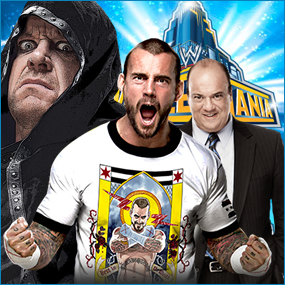 Our Very Own Hustler De Tuti Hustlers has done just about everything in his career, but he’s never managed at a WrestleMania mega-event … until he stepped out in front of 80,000 people live with his best friend CM Punk!

CM Punk‘s attempt to break the most heralded streak in the history of sports entertainment was, in an of itself, a historic occasion, as the longest reigning WWE Champion of the past quarter century was joined by our very own Hustler De Tuti Hustlers Paul Heyman in this epic battle against The Undertaker!

EAST RUTHERFORD, N.J. — CM Punk came to WrestleMania to prove  to the world that The Undertaker was not a Demon from Death Valley, that his mythical urn was nothing but a tin jar full of dirt, that The Deadman’s storied Streak was just another record waiting to be broken.

On The Grandest Stage of Them All, Punk faced the same reality as 20 other Superstars before him — the legend of The Phenom is not just “hocus pocus.”

In what was perhaps the most personal of The Deadman’s 21 WrestleMania matches, Undertaker successfully defended his flawless Show of Shows record against a Superstar flagrant enough to publically desecrate the memory of Undertaker’s close friend and former manager, Paul Bearer. Last seen pouring the contents of Bearer’s hallowed urn on top of The Phenom’s fallen body, Punk was black-hearted in his pursuit to get inside The Deadman’s head, but he did not consider what it would be like to deal with the devils that dwell inside.

Entering MetLife Stadium to the bombast of a live Living Colour performance of his “Cult of Personality” theme, Punk walked fearlessly onto a battlefield where icons like Shawn Michaels, Triple H and Ric Flair had fallen before him. Was it confidence? Arrogance? It may have been both, but the wicked iconoclast from unforgiving Chicago streets did not lose his will when The Deadman approached him through bolts of lightning and plumes of fire in an entrance that has been intimidating challengers since the days when Hulk Hogan was WWE Champion.

Of course, we’re HustleTweeting about CM Punk vs The Undertaker, and you’re more than welcome to join the conversation by following us on twitter HERE or write us directly at hustleoncrave@gmail.com  Hey, have you checked out the Hustle’s Ultra High Quality You Tube Channel, with exclusive videos featuring OUR WORLD EXCLUSIVE WITH MIKE TYSON … BROCK LESNAR’S “HERE COMES THE PAIN” … ICE-T AND COCO’s SEX SECRETS … TEEN SENSATION TAYLOR MOMSEN … UFC BAD BOY NICK DIAZ … THE WALKING RIOT MISSY HYATT if you’re not subscribing, you’re missing something … and by the ways cheapos, it’s FREE! Yes, absolutely 100 percent FREE! What are you waiting for? Check it out HERE!