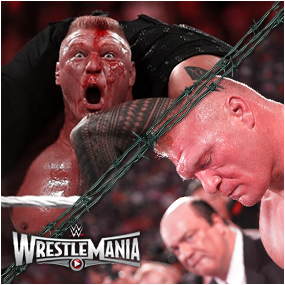 Even our very own Hustler De Tuti Hustlers Paul Heyman didn’t see it coming … after Brock Lesnar demolished Roman Reigns, The Samoan Bad Ass bloodied The Beast … and then Seth Rollins made his move!

It was one of, if not the greatest WWE WrestleMania main events of all time. Roman Reigns came down first. Then the champ, along with his advocate (our boss, in someone’s corner for the first time in a Mania main event in his amazing career). Paul introduced Brock as the entire stadium said “reigning defending” along with him. And then came the fight.
And what a fight it was.
Brock Lesnar delivered a heinous beating to Roman Reigns, but the enforcer of The Shield took it all and then came back with Superman Punch – Spear combos that had Lesnar reeling. And then, out of nowhere, Brock hit an F-5 … only for Seth Rollins to come down and cash in Money in the Bank, making the match a Triple Threat .. hit the Curb Stomp on both competitors … only for Lesnar to snatch Rollins for the F-5. Reigns hit a Spear which drove Lesnar out of the ring. Rollins landed on his feet. Hit a Curb Stomp and became the new reigning defending undisputed WWE Heavyweight Champion of the World.
Of course, we’re HuslteTweeting about WWE WrestleMania and you’re more than welcome to join by following the Hustle on Twitter HERE or write to us directly at hustleoncrave@gmail.com Hey, have you checked out the Hustle’s Ultra High Quality You Tube Channel, with exclusive videos featuring the #HUSTLEBOOTYTEMPTATS SUPERMODEL OF THE YEAR … OUR WORLD EXCLUSIVE WITH MIKE TYSON … BROCK LESNAR’S “HERE COMES THE PAIN” … ICE-T AND COCO’s SEX SECRETS … MMA BAD BOY NICK DIAZ … the list goes on and on, so if you’re not subscribing, you’re missing something … and by the ways cheapos, it’s FREE! Yes, absolutely 100 percent FREE! What are you waiting for? Check it out HERE

CLICK ON THE PICS BELOW TO SEE THE ENTIRE OFFICIAL WWE PHOTO GALLERY FEATURING THE MAIN EVENT OF WRESTLEMANIA!

SPECIAL LOOK BEHIND THE SCENES AT WRESTLEMANIA WEEK INCLUDING EXCLUSIVE FOOTAGE OF BROCK LESNAR NEVER SEEN BEFORE! 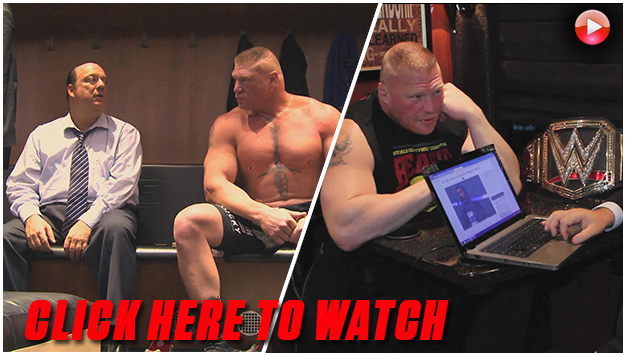