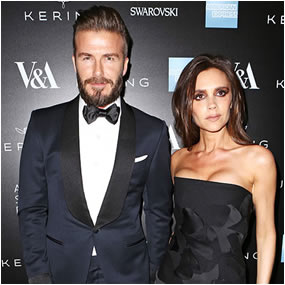 We’ve got mad respect for David Beckham, but we have to tell ya …

Um … now we all know the story of the world famous soccer star David Beckham, he of the underwear commercials and billboards, who married Victoria WhateverhernamewasbeforeshewasaBeckham who was one of the Spice Girls, right? She was known as Posh, and from her breast enhancements to her multiple makeovers, she was tabloid fodder for the longest time. But the pop star became a fashion designer, and not an unsuccessful one at that. Lil’ Miss Victoria Beckham made quite a name for herself, and she was not just living off the riches brought home by her stud star athlete husband and her own rather high-end royalty checks. Mrs Beckham was making it as a designer.

Which brings us to the Steve McQueen event in the UK, where David Beckham showed up with a zombie on arm, who was later identified by the paparazzi (well, at least the ones whose flesh was not gnarled on by Zombie Girl) as … you guess it … Victoria “Don’t Call Me Posh” (or tan, for that matter) Beckham!

We just don’t know what to say.

Maybe you do … so please feel free to HustleTweet us about Victoria “Posh” Beckham’s New Look by following the Hustle on Twitter HERE or write to us directly at hustleoncrave@gmail.com Hey, have you checked out the Hustle’s Ultra High Quality You Tube Channel, with exclusive videos featuring OUR WORLD EXCLUSIVE WITH MIKE TYSON … BROCK LESNAR’S “HERE COMES THE PAIN” … ICE-T AND COCO’s SEX SECRETS … MMA BAD BOY NICK DIAZ … the list goes on and on, so if you’re not subscribing, you’re missing something … and by the ways cheapos, it’s FREE! Yes, absolutely 100 percent FREE! What are you waiting for? Check it out HERE!

CLICK ON THE PICS BELOW TO SEE THE ENTIRE “HEYMAN HUSTLE”
PHOTO GALLERY FEATURING VICTORIA “POSH” BECKHAM IN THE UK!