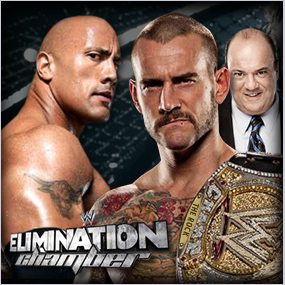 FINAL UPDATE NOW POSTED! Our Very Own Hustler De Tuti Hustlers Paul Heyman led CM Punk to the Ring in New Orleans for an Epic Encounter with The Rock … and the Right For Only One Man to Call Himself “The WWE Champion!”

THE HEYMAN HUSTLE will be HustleTweeting throughout the evening as our very own Hustler De Tuti Hustlers Paul Heyman and CM Punk will main event the WWE Elimination Chamber pay per view. There is a huge controversy at hand, as PAUL DECLARED POSSESSION IS NINE-TENTHS OF THE LAW, AND PUNK HAS POSSESSION OF THE WWE TITLE BELT! Narlins will reportedly host next year’s WrestleMania, but who will emerge as the top dog in WWE tonight?

NEW ORLEANS — Despite CM Punk’s best efforts to exploit an unusual set of rules that worked to the his benefit, The Rock would not be denied his goal of trumping The Second City Saint at Elimination Chamber and returning to the main event of WrestleMania as WWE Champion for a match against John Cena.

Enraged over Punk’s robbery of the physical WWE Title last Monday on Raw, the captain of Team Bring It had to be careful not to lose his temper and get disqualified, thanks to perilous match stipulation added last week in a last-ditch power play architected by Punk adviser Paul Heyman. The added stipulation removed the normal champion’s advantage: Per the orders of WWE Chairman Mr. McMahon, if The Rock were to lose by disqualification or count-out, the WWE Title would go back to Punk.

Acquiesced by Mr. McMahon on last week’s Raw, the new match conditions essentially doubled the number of ways The Straight Edge Savior could win back the championship gold he claimed was his all along. The sly challenger never lost sight of this boon, doing everything in his power to provoke The Rock into losing his composure and breaching WWE’s rulebook.

Punk entered the New Orleans Arena as he had entered dozens of WWE arenas in 2012, with Heyman in tow, hoisting the WWE Title gold overhead. Continuing his needling of The Brahma Bull, The Straight Edge Savior again demanded to be introduced by ring announcer Justin Roberts as “The People’s Champion.” Seemingly delusional since losing the title in an epic Match of the Year contender at Royal Rumble, Punk appeared wholly confident — if not cocksure — on what would have been day 455 of his title reign had the returning Rock not intervened.

The Second City Saint wasted no time in trying to get under the skin of The Rock, first slapping him and then, in a second, grave insult, spitting in The Rock’s face. The Great One responded fiercely by repeatedly bouncing the challenger’s head off the commentary tables. In a scene that would play out several times in the championship bout, however, Heyman distracted the official, allowing Punk to stall the real “People’s Champion” with a thumb to the eye.

As the savvy Straight Edge Savior wore down his larger opponent with a rear chinlock, the divided WWE Universe in attendance at New Orleans Arena broke into dueling chants of “Let’s go Rocky” and “CM Punk.”

CLICK HERE FOR A SPECIAL DISCOINT ON THE OFFICIAL CM PUNK #Knees2Faces AND THE #PaulHeymanGuy T-SHIRT COMBO EXCLUSIVELY FROM WWE!

Of course, we’re HustleTweeting about CM Punk vs The Rock, and you’re more than welcome to join the conversation by following the Hustle on Twitter HERE … Hey, we’re also on Facebook HERE … and since we haven’t updated our MySpace page even though Justin Timberlake has invested in your grandpa’s social media, you’re welcome to check out our much-ignored page HERE.

CLICK ON THE PICS BELOW TO SEE THE ENTIRE OFFICIAL WWE PHOTO
GALLERY OF CM PUNK VS THE ROCK AT THE ELIMINATION CHAMBER PPV!