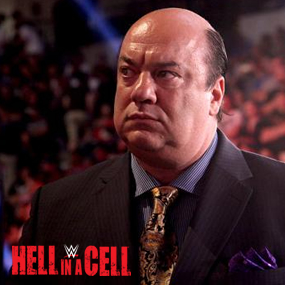 Cena gets the next shot against WWE World Heavyweight Champion Brock Lesnar … and our own Hustler De Tuti Hustlers realizes the task at hand!

15 time WWE champion John Cena will have a chance to tie Ric Flair for the record of 16 world championships, as The Doctor of Thugonomics defeated Randy Orton at WWE Hell in a Cell to earn the next title shot against The Beast Incarnate. According to WWE.com:

DALLAS– In one of the most grueling showdowns of their 10-year rivalry, John Cena and Randy Orton would use the intimidating confines of a 20-foot-high, five-ton structure to absolutely rip each other apart.In reigning supreme over The Viper in the first of two Hell in a Cell Matches of WWE’s Network monumental pay-per-view, the 15-time World Champion has earned a WWE World Heavyweight Title Match against the current champion, Brock Lesnar.

Cena’s victory was anything but easy, though. Almost instantly, Orton gained the early advantage and would not let go. In fact, it wasn’t long before the vicious serpentine Superstar would incorporate a steel chair into his already venemous arsenal, before raking his longstanding opponent’s face into the dreaded metal Cell.

Though Cena would momentarily power his way back into contention and use the Cell to his advantage, WWE’s Apex Predator once again countered and threw the Cenation leader into the steel post, legs first.

Of course, we’re HustleTweeting about Brock Lesnar vs John Cena, and you’re more than welcome to join the conversation by following us on twitter HERE or write to us directly at hustleoncrave@gmail.com Hey, have you checked out the Hustle’s Ultra High Quality You Tube Channel, with exclusive videos featuring OUR WORLD EXCLUSIVE WITH MIKE TYSON … BROCK LESNAR’S “HERE COMES THE PAIN” … ICE-T AND COCO’s SEX SECRETS … MMA BAD BOY NICK DIAZ … the list goes on and on, so if you’re not subscribing, you’re missing something … and by the ways cheapos, it’s FREE! Yes, absolutely 100 percent FREE! What are you waiting for? Check it out HERE!

CLICK ON THE PICS BELOW TO SEE THE ENTIRE OFFICIAL WWE
PHOTO GALLERY FEATURING JOHN CENA VS RANDY ORTON AT HELL IN A CELL!