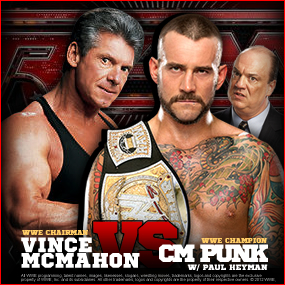 The entire landscape of WWE has changed!

When WWE CHAMPION CM PUNK SLAPPED VINCE McMAHON ACROSS THE FACE during the Monday Night Raw that aired LIVE from Sacramento, California, the past few months of controversy surrounding Punk and our own Hustler De Tuti Hustlers Paul Heyman all came to a head.

Not only did HEYMAN AND JIM ROSS TRY TO TALK VINCE McMAHON OUT OF THE MATCH, but our boss (not Vince) expressed fear during a #RAWactive EXCLUSIVE BACKSTAGE WITH MATT STRIKER!

There was no talking Vince McMahon out of this match. And equally driven to collide with his opponent was the champion himself, CM Punk. WWE.com provided full coverage of the match:

As it turned out, CM Punk vs. Mr. McMahon wasn’t much of a match, as the bell never rang to signal the beginning of the contest. That said, it was one undeniably epic fight.

The brutality began early, when Punk attacked The Chairman from behind before he could even take to the ring. The Second City Saint showed no mercy in the man he once considered his chief tormentor, battering The Boss about the ring before Mr. McMahon began to show signs of life. The Chairman gave as good as he got, pummeling Punk on the outside and even catching some air as he leaped over the announce table to pounce on The Second City Saint while he lied prone amid the announce chairs. Mr. McMahon’s acquisition of a kendo stick from beneath the ring sent Punk scurrying. But when The Chairman laid hands on Punk’s beloved WWE Title (decking Heyman to get it in the process) and dared him to come and get it, The Voice of the Voiceless was left with no choice but to retaliate.

And retaliate he did. Once Punk got his hands on a kendo stick of his own, he went mano-a-mano with The Chairman, and an expert possum play led to a low blow that left Mr. McMahon sprawled across the ring. After dishing another battering with the two kendo sticks, Punk finally hauled The Chairman up for the Go to Sleep, and it seemed there were very few words from anyone that could have stopped the onslaught at that point.

And then, right on cue, two of them erupted through the loudspeakers:

For the third time, Ryback made a beeline for the WWE Champion and, with an assist from John Cena, this time “Big Hungry” hit paydirt, cutting The Second City Saint down with a clothesline before lifting Punk into the air for Shell Shocked … until Punk squirmed off Ryback’s grip and, in a strange repeat from his infamous exit at Money in the Bank, exited through the crowd.

McMahon, down but not out, got to his feet, grabbed the mic and presented Punk with an ultimatum: At Hell in a Cell, he would either face John Cena or Ryback. And if the champion hadn’t made up his mind in seven days … well, The Chairman would make it for him.

Of course, we’re HustleTweeting about CM Punk, Mick Foley, and being a Paul Heyman Guy, and you’re more than welcome to join the conversation by following THE HEYMAN HUSTLE on Twitter HERE or write to us directly at hustleoncrave@gmail.com  Hey, have you checked out the Hustle’s Ultra High Quality You Tube Channel, with exclusive videos featuring OUR WORLD EXCLUSIVE WITH MIKE TYSON … BROCK LESNAR’S “HERE COMES THE PAIN” … ICE-T AND COCO’s SEX SECRETS … TEEN SENSATION TAYLOR MOMSEN … UFC BAD BOY NICK DIAZ … THE WALKING RIOT MISSY HYATT if you’re not subscribing, you’re missing something … and by the ways cheapos, it’s FREE! Yes, absolutely 100 percent FREE! What are you waiting for? Check it out HERE!

CLICK ON THE PICS BELOW TO SEE WWE’s OFFICIAL COVERAGE
OF THE HISTORIC FIGHT BETWEEN CM PUNK AND VINCE McMAHON! 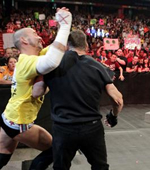 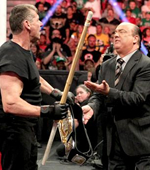 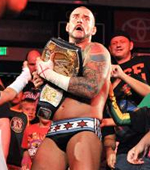 HERE’S WWE’s OFFICIAL HIGHLIGHT REEL OF PUNK VS McMAHON FROM
THE OCTOBER 8th EDITION OF MONDAY NIGHT RAW FROM SACRAMENTO! 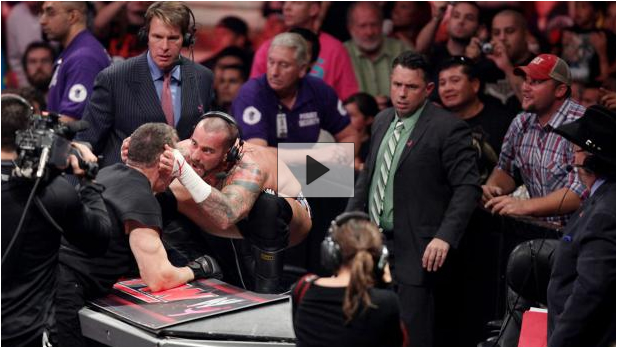