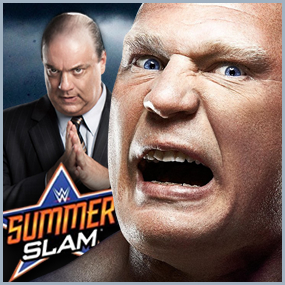 The Beast is Back, and he’s looking for something new to conquer! Our very own Hustler De Tuti Hustlers Paul Heyman brought Brock Lesnar to RAW, and we feel our boss was not going to take “no” for an answer. According to WWE.com:

Not quite. The Apex Predator emerged when Triple H made his move to announce The Champ’s challenger, though he was intercepted by Roman Reigns on his way to the ring. So, Plan A is out. Plan B has Dean Ambrose to deal with.

Enter Paul Heyman with Plan C. “C” as in the conqueror himself, Brock Lesnar. And one quick handshake with the COO and reiteration of Brock’s bona fides later, Heyman made a declaration that may yet become a spoiler as well: “This malpracticing Doctor of Thuganomics is in for the beating of a lifetime.”

Bold words. But he’s been right before.

Of course, we’re HustleTweeting about Brock Lesnar, and you’re more than welcome to join the conversation by writing us on twitter HERE or write to us directly at hustleoncrave@gmail.com Hey, have you checked out the Hustle’s Ultra High Quality You Tube Channel, with exclusive videos featuring OUR WORLD EXCLUSIVE WITH MIKE TYSON … BROCK LESNAR’S “HERE COMES THE PAIN” … ICE-T AND COCO’s SEX SECRETS … MMA BAD BOY NICK DIAZ … the list goes on and on, so if you’re not subscribing, you’re missing something … and by the ways cheapos, it’s FREE! Yes, absolutely 100 percent FREE! What are you waiting for? Check it out HERE!

HIGHLIGHTS FROM PAUL HEYMAN AND BROCK LESNAR’S APPEARANCE AT
THE VERY END OF WWE MONDAY NIGHT RAW JUST A FEW HOURS AGO!