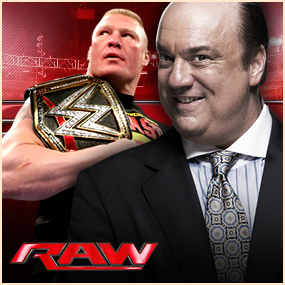 For the 2nd week in a row, Paul Heyman’s mic was cut off. This time, he had Brock Lesnar in the ring with him. Twenty days before WrestleMania, a battle line has been drawn.

Last week, when PAUL HEYMAN PROMISED BROCK LESNAR WOULD “RONDA ROUSEY” ROMAN REIGNS’ ASS AT WRESTLEMANIA, all hell broke loose when somehow, Paul’s mic was cut off momentarily. This week, it got even crazier. According to WWE.com:

He’s back. And he’s not impressed. The first Raw appearance of Brock Lesnar in a month was largely used as an opportunity for The Beast Incarnate to react, along with Paul Heyman, to a video hyping the rise of Lesnar’s No. 1 contender, Roman Reigns. That Heyman placed the hype on par with the leavings of a bull was unsurprising, especially with Lesnar standing by his side. But the degree to which Heyman predicted The Anomaly’s triumph at The Show of Shows was the most surprising: pinning Roman, tearing Seth Rollins limb from limb and putting any Montreal-like co-conspirators in their graves were all on the table. Getting his mic shut off again only kicked Heyman into overdrive. By the end of his missive, any title in the world was in play, Brock Lesnar was poised to conquer the world itself, and you could have heard a pin drop in Pittsburgh.

Of course, we’re HustleTweeting about WrestleMania XXXI, and you’re more than welcome to join the conversation by following the Hustle on Twitter HERE or write to us directly at hustleoncrave@gmail.com Hey, have you checked out the Hustle’s Ultra High Quality You Tube Channel, with exclusive videos featuring OUR WORLD EXCLUSIVE WITH MIKE TYSON … BROCK LESNAR’S “HERE COMES THE PAIN” … ICE-T AND COCO’s SEX SECRETS … MMA BAD BOY NICK DIAZ … the list goes on and on, so if you’re not subscribing, you’re missing something … and by the ways cheapos, it’s FREE! Yes, absolutely 100 percent FREE! What are you waiting for? Check it out HERE!

CLICK ON THE PICS BELOW TO SEE THE ENTIRE OFFICIAL WWE
PHOTO GALLERY FEATURING BROCK LESNAR AND PAUL HEYMAN AT RAW!

“BROCK LESNAR WILL UNIFY THE WWE AND UFC TITLES!” 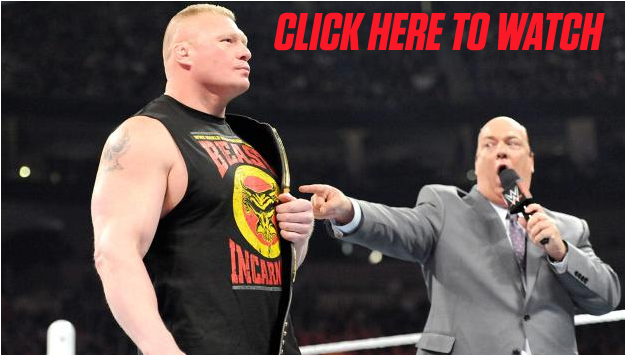