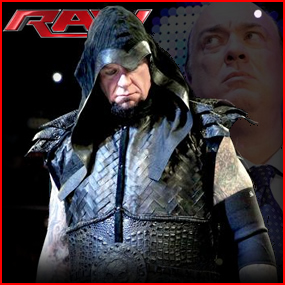 WWE Monday Night RAW from Memphis features our very own Hustler De Tuti Hustlers respectfully interrupting The Undertaker to make a point on behalf of his client Brock Lesnar!

When The Undertaker walked out to the ring in Memphis, Tennessee for WWE Monday Night RAW, we have to believe the last thing on his mind was that he would be interrupted … or praised to the high heavens (or maybe … ) by Paul Heyman! According to WWE.com:

Paul Heyman talked a big game last week, but The Undertaker casts a bigger shadow than the mad scientist’s mouth could ever muster up. The Phenom, returning to Raw for the first time since accepting Brock Lesnar’s open challenge for WrestleMania 30, vowed to keep his storied Streak alive and make it two-for-two against Paul Heyman Guys at The Show of Shows.

Or he would have, had Heyman not interrupted The Last Outlaw before he even got going, begging The Undertaker to abandon his contest with Lesnar and ensure his Streak’s survival with The Anomaly. The Phenom wasn’t exactly shaking in his boots, demanding Heyman bring Lesnar a dark warning of what’s to come: “If he shows up in New Orleans, he will rest in peace.”

CLICK ON THE PICS BELOW TO SEE THE ENTIRE OFFICIAL WWE PHOTO
GALLERY FEATURING PAUL HEYMAN RUNNING DOWN THE IMPRESSIVE STATS
THAT DEFINE THE UNDERTAKER’S WRESTLEMANIA UNDEFEATED STREAK!

HERE IT IS … PAUL HEYMAN TALKS WITH THE UNDERTAKER! 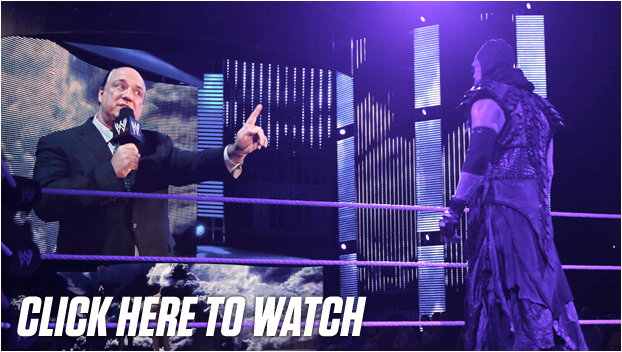