Did Paul Heyman Offer Seth Rollins a Chance to Jump From The Authority? Does Brock Lesnar Approve of the Deal Heyman Just Offered Rollins? Or Did Our Very Own Hustler De Tuti Hustlers Just Narrowly Avoid a Curb Stomp?

Well, this is one that you’ll need to watch over and over again. When our boss Paul Heyman went face-to-face with Seth Rollins on WWE Smackdown, little did anyone know how many possible different outcomes to the WWE Royal Rumble main event, a Triple Threat Match for the Undisputed WWE World Heavyweight Championship, would be discussed. According to WWE.com:

After his client, WWE World Heavyweight Champion Brock Lesnar got Curb Stomped to conclude Raw, Paul Heyman was clearly in a less than cheerful mood when he walked into a SmackDown ring. Nevertheless, a fired up Seth Rollins was not afraid to cut off Lesnar’s advocate before announcing that he was ready to cash in his Money in the Bank briefcase right then and there. The only problem was that The Beast Incarnate was not in the building, so Mr. Money in the Bank instead contemplated delivering a Curb Stomp to a cornered Heyman.

Somehow, The Beast Incarnate’s outspoken mouthpiece managed to talk his way out of another jam with a vague statement about the unpredictable future of The Authority’s rule and his own rise in power.

Of course, we’re HustleTweeting about Paul Heyman and Seth Rollins, and you’re more than welcome to join the conversation by following the Hustle on Twitter HERE or write to us directly at hustleoncrave@gmail.com Hey, have you checked out the Hustle’s Ultra High Quality You Tube Channel, with exclusive videos featuring OUR WORLD EXCLUSIVE WITH MIKE TYSON … BROCK LESNAR’S “HERE COMES THE PAIN” … ICE-T AND COCO’s SEX SECRETS … MMA BAD BOY NICK DIAZ … the list goes on and on, so if you’re not subscribing, you’re missing something … and by the ways cheapos, it’s FREE! Yes, absolutely 100 percent FREE! What are you waiting for? Check it out HERE!

CLICK ON THE PICS BELOW TO SEE THE ENTIRE OFFICIAL WWE PHOTO
GALLERY FEATURING PAUL HEYMAN’S EPIC CONFRONTATION ON SMACKDOWN
WITH “THE FUTURE OF WWE” SETH ROLLINS! 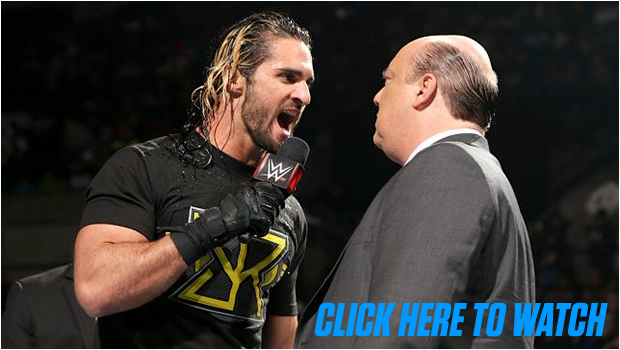