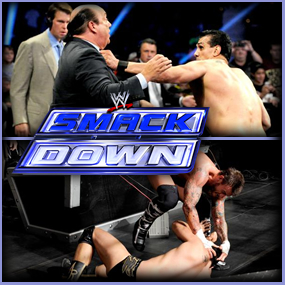 Our very own Hustler De Tuti Hustlers is assigned the task of being guest color commentator for CM Punk’s match vs Alberto Del Rio … and friendship, once again, prevails over business!

Smackdown General Manager Teddy Long asked our boss Paul Heyman to be the guest color commentator for The Best in The World CM Punk’s match with World Heavyweight Champion Alberto Del Rio Well, in the ongoing saga of CM Punk and Paul Heyman, all hell broke loose at ringside. According to WWE.com:

Earlier on SmackDown, Paul Heyman urged CM Punk to let him stand in his corner at Money in the Bank, but “The Best in the World” responded by requesting that his friend stay out of things altogether. However, Teddy Long would later order Heyman to join the SmackDown announce team for the main event match between Punk and World Heavyweight Champion Alberto Del Rio. When the match spilled outside the ring, Del Rio looked to use the announce table as a weapon. Though Heyman tried to talk him out of it, The Mexican Superstar knocked the ECW founder to the ringside floor. Seeing this, Punk snapped, viciously attacking Del Rio until the referee counted out both Superstars.

After the bell, The Straight Edge Superstar refused to relent, executing the GTS on his opponent. He then helped his war-torn friend away from the chaos as SmackDown went off the air.

Of course, we’re HustleTweeting about CM Punk and Paul Heyman, and you’re more than welcome to join the conversation by following us on twitter HERE or write us directly at hustleoncrave@gmail.com  Hey, have you checked out the Hustle’s Ultra High Quality You Tube Channel, with exclusive videos featuring OUR WORLD EXCLUSIVE WITH MIKE TYSON … BROCK LESNAR’S “HERE COMES THE PAIN” … ICE-T AND COCO’s SEX SECRETS … TEEN SENSATION TAYLOR MOMSEN … UFC BAD BOY NICK DIAZ … THE WALKING RIOT MISSY HYATT if you’re not subscribing, you’re missing something … and by the ways cheapos, it’s FREE! Yes, absolutely 100 percent FREE! What are you waiting for? Check it out HERE!

CLICK ON THE PICS BELOW TO SEE THE ENTIRE OFFICIAL PHOTO
GALLERY FROM WWE SMACKDOWN FEATURING CM PUNK AND PAUL HEYMAN!