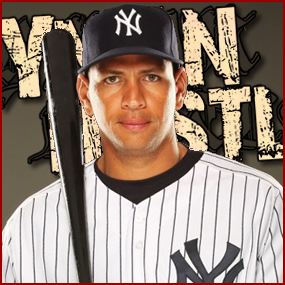 The Disgraced New York Yankee Makes Global Headlines in Mexico City, as the Captain of the Bronx Bombers Weighs In on the Entire Situation!

Alex Rodriguez may be suspended (or is the term “banned”) for the entire 2014 season and post-season by Major League Baseball, but the New York Yankee is not out of work. Appearing in Mexico City for a paid promotional appearance, A-Rod (perhaps wisely) declined to talk specifically about his suspension for violating baseball’s drug agreement and labor contract. However, in his first public comments since arbitrator Fredric Horowitz’s decision last weekend (CLICK HERE FOR THE HEYMAN HUSTLE’s IN-DEPTH 360 COVERAGE OF THE DECISION AND ITS RAMIFICATIONS), A-Rod said he wanted to end his career wearing the legendary Yankee pinstripes. Hal Steinbrenner has declined to talk about his possible return but has called him a “great player.”

A-Rod commented, “The 2014 season could be a big help for me … it might serve as a break and close the chapter, and begin in 2015 with my last three years under contract with the Yankees.”

A-Rod, who will be 39 years old when the 2015 season opens, continued, “I want to retire in New York, and I think the rest will do me good … For me, the book isn’t finished. There are still chapters to finish. … Right now I haven’t thought about retiring.”

A-Rod is fifth on Major League Baseball’s all time list with 654 homers. The slugger sued Major League Baseball and the players’ union on Monday in an effort to overturn the decision by Horowitz, who reduced what originally was a 211-game suspension issued by commission Bud Selig in August.

“This process has been taxing both mentally and physically throughout the past eight months,” Ron Berkowitz, a spokesman for Rodriguez, said in a statement Thursday. “Alex will abide by the rulings of the federal judge … whatever he decides … and get ready for 2015 should the judge rule against him. He will continue to move forward with his complaint which will help all players against this unfair system.”

Derek Jeter, the Yankees Captain, also spoke to the media on Thursday and said he is saddened by the situation.

“The whole situation is bad,” Jeter said at his Turn 2 Foundation golf classic in Tampa, Florida, “The whole thing has been kind of messy.” Jeter has been in communication with Rodriguez, but declined to say what was discussed. “I’m sure it’s a rough situation,” Jeter said.

Of course, we’re HustleTweeting about A-Rod and Derek Jeter, and you’re more than welcome to join the conversation by following THE HEYMAN HUSTLE on Twitter HERE or write to us directly at hustleoncrave@gmail.com  Hey, have you checked out the Hustle’s Ultra High Quality You Tube Channel, with exclusive videos featuring OUR WORLD EXCLUSIVE WITH MIKE TYSON … BROCK LESNAR’S “HERE COMES THE PAIN” … ICE-T AND COCO’s SEX SECRETS … TEEN SENSATION TAYLOR MOMSEN … UFC BAD BOY NICK DIAZ … THE WALKING RIOT MISSY HYATT if you’re not subscribing, you’re missing something … and by the ways cheapos, it’s FREE! Yes, absolutely 100 percent FREE! What are you waiting for? Check it out HERE!