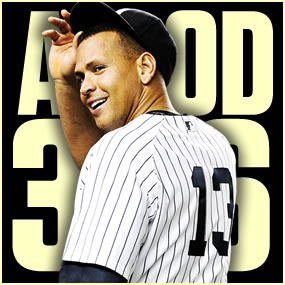 Alex Rodriguez is the hottest player on the New York Yankees, and the team hates it!

AROD is batting .316 so far this season, and the jokes are aplenty. The 39 year old is off to a hot start, hotter than anyone else on the New York Yankees ball team, and he’s only getting hotter. Now, with Carlos Beltran sidelined with an illness over the weekend, Alex Rodriguez hit in the number 3 spot in the Yankees’ lineup.

“If Carlos was playing today,” the manager said before Saturday’s game, “I would have hit Carlos third.”

Something changed for Girardi over the next 48 hours, as he inserted a healthy Beltran back into the lineup Monday against the Tigers, but left A-Rod in the number 3  spot, dropping Beltran to fifth in the lineup.

“Alex has been playing great; he’s getting on base, and he’s doing everything that you want,” Girardi said. “So I just flip-flopped them for now. Alex is swinging great.”

“You look at the run production that we’ve gotten from him, a lot of our wins are directly the result of what he’s done in certain games,” Girardi said. “I can look back just to the other night where he had four of the RBIs. He’s also on base a lot. He’s being patient and taking his walks. When you get people on base, you have a chance to have big innings.”

Rodriguez didn’t speak with reporters before Monday’s series opener in Detroit, but Saturday he said it felt good to have Girardi’s trust after being penciled into the number 3 spot against Tampa Bay.

“That’s always something that’s good to have, is Joe’s trust,” Rodriguez said. “That’s something that I’m always working for. We have a lot of history here. Wherever he puts me, I’m ready to go.”

A-Rod went only 1-for-6 in his two games hitting third against the Rays, but he drew four walks and scored four runs, finding a way to help out even when he wasn’t hitting tape-measure home runs the way he did Friday night.

“You continue to watch his at-bats,” Girardi said. “He’s taking his walks, and he’s being patient. He’s doing just a lot of things right, and that’s why I moved him up.”

Girardi opened the season with A-Rod hitting seventh, though he’s shuttled him up and down the lineup on days when other players sat out. A-Rod has hit in every spot other than one, eight and nine, though six and seven had been the most frequent before the weekend.

“I wasn’t sure what to expect in spring training, I really wasn’t,” Girardi said. “But Alex is a worker, and he knows how to play the game, and he’s been a very smart player for a long time, so if there was anyone that could figure it out quickly, it would be Alex.”

The Yankees entered the week ranked fifth in the American League with 64 runs scored and second with 17 home runs, producing those numbers despite sub-.200 averages from four regulars … Beltran, Mark Teixeira, Stephen Drew and Didi Gregorius.

Beltran is the most concerning of that group, as he hadn’t provided any power, either. Unlike Teixeira, who had three home runs and a .500 slugging percentage, Beltran hadn’t hit one out through the first two weeks, producing a weak .289 slugging percentage.

“You see a lot of really good hitters start off slow; you just kind of ride through it,” Girardi said. “You know eventually it’s going to change and they’re going to get back to where they’re supposed to. It’s unfortunate he got sick. I thought he was swinging the bat better.”

Girardi also said “it was hard to ignore what Alex was doing,” so if A-Rod continues to swing a hot bat, he could find himself residing in the three-hole indefinitely.

“If he was 25, it’d be impressive what he’s done,” Girardi said. “When you look at the home runs, the RBI, the average, at any age that’s impressive. But when you start looking at a guy who’s 39½ and had two hips surgeries, who missed a couple years basically, it’s not easy.”

Of course, we’re HustleTweeting about A-Rod, and you’re more than welcome to join the conversation by following The Heyman Hustle on Twitter HERE! You can also post your thoughts on our Facebook page HERE!  If you feel compelled to write us, please do so at HustleOnCrave (at) Gmail.com