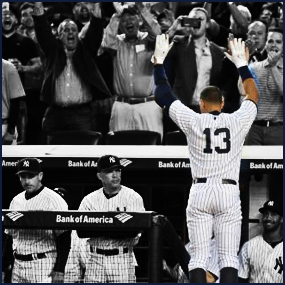 Alex Rodriguez Passes Willie Mays, But Will Not Collect His Bonus For Becoming The Fourth Most Prolific Home Run Hitter in MLB History!

And then there were four. Last night, New York Yankee Alex Rodriguez surpassed Willie Mays on the all time home run hitter list. This puts A-Rod in fourth place on the career homer list.

“Nobody will ever pass Willie Mays,” Rodriguez said. “All of this is pretty crazy. A year ago today, I never thought that I would ever get a curtain call or be htting in the middle of the lineup for the New York Yankees, helping our team win.”

As the Hustle reported, THE YANKEES ARE REFUSING TO PAY A-ROD ANY MILESTONE BONUS DUE TO HIS SUSPENSION ON PERFORMANCE-ENHANCING DRUGS.

When asked whether he and his advisers had decided whether to file a grievance regarding the millions in bonus money, A-Rod dodged the question instantly stating, “That’s not where my mind is right now,” Rodriguez said. “I’m really just trying to enjoy this moment.”

Regarding his 661st home-run, “I thought the reaction was incredible,” said Rodriguez. “It was very humbling. We have the greatest fans in the world. They’ve treated me really good all year and it’s fueling the way I’m playing. I’ve said it all along: the league, the Yankees the fans — nobody owes me anything.”

And in closing Rodriguez states “I promised myself that I would come out and enjoy every moment. The way the fans have allowed me to come back and play baseball, the way I repay them is by working hard, playing hard and trying to help our team win.”

Of course, we’re HustleTweeting about Alex Rodriguez and you’re more than welcome to join the conversation by following The Heyman Hustle on Twitter HERE! You can also post your thoughts on our Facebook page HERE!  If you feel compelled to write us, please do so at HustleOnCrave (at) Gmail.com