A-ROD Is Used as a Pinch Hitter, Hits Game-Winning Home Run To Tie Willie Mays at "660" 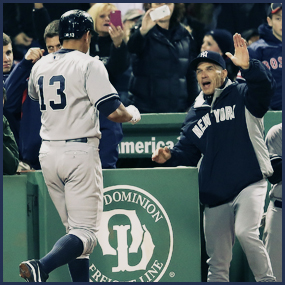 Just hours after THE NEW YORK YANKEES ANNOUNCED ALEX RODRIGUEZ WOULD SIT OUT TONIGHT’S GAME IN BOSTON, the 39 year old slugger was tagged in as a pinch hitter in the eighth inning, and his game-winning home run will go down as his 660th, tying Willie Mays as 4th on the all time home run kings’ list.

Rodriguez absolutely drilled a 3-0 pitch from Junichi Tazawa over the left-field wall. 35,444 fans at Fenway Park got to witness history, but there was no mention of the significance of the homer on the huge screen high above right-center field. Rodriguez’s sixth home run of the season was the first of 660 home runs in a pinch-hitting role. Rodriguez started the game 1-for-16 as a pinch-hitter.

It was the 11th victory in 14 games for the Yankees, who are now 14-9, and increased their lead over rival Boston in the AL East to two games.

CC Sabathia allowed two runs and seven hits in six innings but was out of the game when Rodriguez hit the home run that likely will send the Yankees and A-ROD to an arbitration hearing to determine if the $6 million bonus in his contract for tying Mays will be paid. The Yankees contend it was a marketing deal and because of Rodriguez’s involvement in the Biogenesis mess, the milestone can no longer be marketed.

Of course, we’re HustleTweeting about New York Yankees vs Boston Red Sox as well as A-ROD vs The New York Yankees and you’re more than welcome to join the conversation by following The Heyman Hustle on Twitter HERE! You can also post your thoughts on our Facebook page HERE!  If you feel compelled to write us, please do so at HustleOnCrave (at) Gmail.com