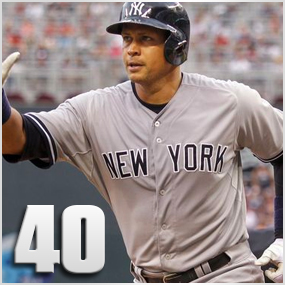 Alex Rodriguez is the most explosive Bronx Bomber on a hot Saturday night!

Alex Rodriguez hit three home runs in a game for the fifth time in his career and keyed a ninth-inning rally against All-Star closer Glen Perkins, which allowed the New York Yankees an 8-5 victory over the Minnesota Twins this evening.

“Some people say that life starts at 40. I’ll sign up for that right now,” said A-Rod, who hits the mark Monday.

“Got to be one of my best feelings since I’ve been in the major leagues,” Murphy said. “There’s no greater feeling than knowing you just won the game for your team.”

Rodriguez hit a 452-foot solo homer in the fourth and a 422-foot drive that made it 5-3 in the seventh. His 424-foot homer in the ninth cleared the center field wall.

He clapped as he trotted around first base after each homer while fans at sold-out Target Field booed. The last time Rodriguez hit three home runs in a game was Aug. 14, 2010, at Kansas City. He didn’t play last season while sitting out a drug suspension.

“I’m healthy, I’m happy, I’m appreciating everything the game has to offer,” he said.

Rodriguez has 23 homers this season and 677 in his career. He is now 6 for 10 lifetime against Perkins with two home runs.

Of course, we’re HustleTweeting about A-Rod, and you’re more than welcome to join the conversation by following the Hustle on Twitter HERE or write to us directly at hustleoncrave@gmail.com Hey, have you checked out the Hustle’s Ultra High Quality You Tube Channel, with exclusive videos featuring the #HUSTLEBOOTYTEMPTATS SUPERMODEL OF THE YEAR … OUR WORLD EXCLUSIVE WITH MIKE TYSON … BROCK LESNAR’S “HERE COMES THE PAIN” … ICE-T AND COCO’s SEX SECRETS … MMA BAD BOY NICK DIAZ … the list goes on and on, so if you’re not subscribing, you’re missing something … and by the ways cheapos, it’s FREE! Yes, absolutely 100 percent FREE! What are you waiting for? Check it out HERE