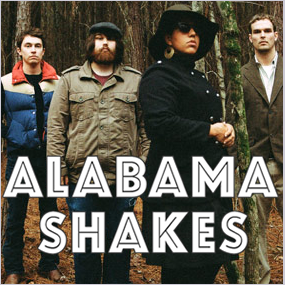 When Our Very Own Hustler De Tuti Hustlers Paul Heyman Says “This Band is Going To EXPLODE All Over the World,” It’s A Prediction We’ve Come To Take Quite Seriously!

Our very own Hustler De Tuti Hustlers Paul Heyman walked into our staff meeting at THE LOOKING4LARRY AGENCY (parent company of THE HEYMAN HUSTLE) and directed all of us to watch a video. When the video ended, Paul looked around the room, asked “so, who knows more about this band, they’re gonna be HUGE!”

And with that, we all realized Alabama Shakes was on the path to global success!

Alabama Shakes is a band from Athens, Alabama which came together when lead singer-guitarist Brittany Howard and bassist Zac Cockrell, both attending East Limestone High School in Athens, began meeting after school to write songs. The two played progressive rock and other genres, but their passion was roots rock. They approached drummer Steve Johnson, who was working at a local music store, asking him to join the band and soon the trio went to Clearwave Recording Studio with producer Jeremy Stephens in Decatur, Alabama, to record some of the songs they were writing. Guitarist Heath Fogg reportedly joined the band after hearing the demo.

Although they had been working on original material, they worked up cover songs by Led Zeppelin, James Brown, Otis Redding and AC/DC  to fill a “one show only” 45-minute set, using the name, The Shakes. The band later added Alabama to their name. They released a four-song EP, “Alabama Shakes” in September, 2011. Check ’em out. Tell us Paul is wrong. Go ahead. We f’n dare you!

Of course, we’re HustleTweeting about Alabama Shakes and you’re more than welcome to join the conversation by following the Hustle on Twitter HERE … Hey, we’re also on Facebook HERE … and since we haven’t updated our MySpace page even though Justin Timberlake has invested in your grandpa’s social media, you’re welcome to check out our much-ignored page HERE.