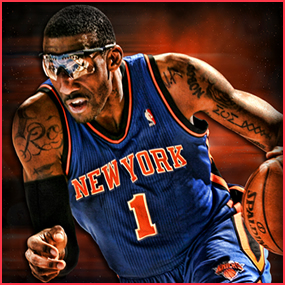 In what will no doubt be big news and probably sports headlines in the morning, THE HEYMAN HUSTLE has learned the New York Knicks have reached a formal buyout with six-time All Star Amar’e Stoudemire, who should clear waivers by Wednesday and be on a new team by the time the All Star Break ends on Thursday. The deal was reportedly finalized before the NBA All Star Game at Madison Square Garden earlier tonight.

Responding to the rumors (which have not been confirmed by anyone else but us so far, so we’re really putting our balls on the line with this one), Carmelo Anthony stated  “It’s hard for me to believe … it hasn’t really sunk in. One of the main reasons I came to New York is because of him.”

Several teams in the Western Conference will no doubt get in a quick bidding war to sign Stoudemire, who would be a solid addition to a playoff team as a reserve. The Dallas Mavericks have already been mentioned as a possible destination, and Mark Cuban is the type of Shark to rule the Tank and sign Stoudemire away from all the other owners.

The San Antonio Spurs are another rumored destination because they are a championship contender every year. The Golden State Warriors can’t be counted out of the race, as Stoudemire played his final season in Phoenix, the GM was Steve Kerr and the head coach was Alvin Gentry.

Kerr and Gentry are now the head coach and assistant coach, respectively, with the Warriors. Hmmmmmm …

Stoudemire is nearing the conclusion of the five-year, $100 million contract he signed with the Knicks as a free agent, but he only appeared in nine playoff games with the Knicks. Their record in those games was 2-7. Stoudemire averaged 25.3 points and 8.2 rebounds per game over 78 appearances in his first season with the Knicks, but he played in just 177 games over the next four years, including 36 during the Knicks’ 10-43 start to this season. He also famously lacerated his left hand punching a fire extinguisher following a Game 2 playoff loss in Miami in 2012. Nicely done, baller!

“Obviously playing these 13 years and through the few injuries, Father Time is ticking. So you know that you want to take advantage of good health when you can and try to win a championship when you can,” Stoudemire said Wednesday in Orlando after the Knicks’ final game before the All-Star Break. “It’s definitely kind of a bittersweet moment, going over all the joyful things that I have accomplished in New York.”

Of course, we’re HustleTweeting about Amar’e Stoudemire, and you’re more than welcome to join the conversation by following the Hustle on Twitter HERE or write to us directly at hustleoncrave@gmail.com Hey, have you checked out the Hustle’s Ultra High Quality You Tube Channel, with exclusive videos featuring OUR WORLD EXCLUSIVE WITH MIKE TYSON … BROCK LESNAR’S “HERE COMES THE PAIN” … ICE-T AND COCO’s SEX SECRETS … MMA BAD BOY NICK DIAZ … the list goes on and on, so if you’re not subscribing, you’re missing something … and by the ways cheapos, it’s FREE! Yes, absolutely 100 percent FREE! What are you waiting for? Check it out HERE!