Amazon To Challenge Netflix As Both Launch in Japan Next Month 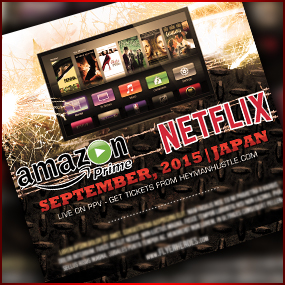 The Battle For The Land of the Rising Sun Begins!

Amazon.com has confirmed it will launch Prime Instant Video in Japan next month, adding the streaming service for no extra cost to members of the free-shipping program, in a direct head-to-head challenge against Netflix, which is set to launch September in Japan.

In Japan, Amazon Prime Instant Video will include popular Japanese and U.S. dramas, variety shows, anime, movies and more, with details to be announced in the coming weeks. The content also will include Amazon Studios’ original series such as “Transparent,” “Mozart in the Jungle” and “Tumble Leaf.”

“As we’ve shown with the launch of Prime Video in the U.S. and around the world, we are investing significantly to bring high-quality, local and popular programming to Prime members, and our customers in Japan should expect the same investment,” Jasper Cheung, president of Amazon Japan, said in a statement. “We’ve been offering videos and DVDs in Japan for 15 years … we know the entertainment customers want … and we plan to deliver it with Prime Video, all at no additional cost.”

Roy Price, VP of Amazon Studios added,  “We are passionate about making distinct, exclusive entertainment that will become Prime member’s next favorite TV show or movie, and we know Prime members in Japan will love what we introduce just for them.”

Amazon launched Prime in Japan 10 years ago, with membership currently costing JPY3900 per year ($32.48 per month) …  just JPY325 monthly, or $2.71. That’s lower what Netflix charges,  which starts at JPY650 ($5.41) per month. Netflix has teamed with mobile provider SoftBank for its launch in the Land of the Rising Sun.

Prime Instant Video will be available on the Amazon Video app for Android and iOS phones and tablets, Fire tablets, game consoles and smart TVs. The service will include select titles in 4K Ultra HD, which has four times the resolution of standard full HD.

In addition to video streaming, Prime members in Japan receive free expedited shipping and scheduled delivery on many products; a Kindle book to read for free each month from the Kindle Owners’ Library; and early access to Amazon Lightning Deals.

Of course, we’re HustleTweeting about this battle for the streaming consumer yen in Japan, and you’re more than welcome to join the conversation by following the Hustle on Twitter HERE or write to us directly at hustleoncrave@gmail.com Hey, have you checked out the Hustle’s Ultra High Quality You Tube Channel, with exclusive videos featuring the #HUSTLEBOOTYTEMPTATS SUPERMODEL OF THE YEAR … OUR WORLD EXCLUSIVE WITH MIKE TYSON … BROCK LESNAR’S “HERE COMES THE PAIN” … ICE-T AND COCO’s SEX SECRETS … MMA BAD BOY NICK DIAZ … the list goes on and on, so if you’re not subscribing, you’re missing something … and by the ways cheapos, it’s FREE! Yes, absolutely 100 percent FREE! What are you waiting for? Check it out HERE