Anderson Silva To Fight in Brazil ... But He Won't Be Defending The UFC Middleweight Championship! 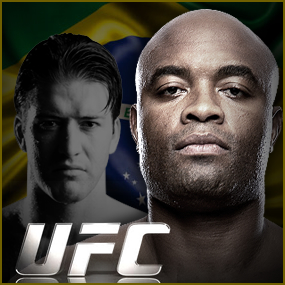 … came up with an idea no one could possibly see coming. Undisputed UFC Middleweight Champion Anderson “The Spider” Silva has agreed to serve as a last-minute substitute to fight Stephan Bonnar in a Light Heavyweight Fight that will take place on October 13th at the HSBC Arena in Rio de Janeiro, Brazil.

Silva had previously announced he wasn’t going to fight again in 2012 after beating Chael Sonnen in July, but now the Middleweight Division’s most dominant champion ever will move up to Light Heavyweight in order to headline a show in his native land.

This is not Silva’s first time as a Light Heavyweight, as he kayoed James Irvin in 2008, and Forrest Griffin in 2009 as a 205 pounder. Of course, we’re HustleTweeting about this most unusual 3-round contest, and you’re more than welcome to join the conversation by following THE HEYMAN HUSTLE on Twitter HERE or write to us directly at hustleoncrave@gmail.com  Hey, have you checked out the Hustle’s Ultra High Quality You Tube Channel, with exclusive videos featuring OUR WORLD EXCLUSIVE WITH MIKE TYSON … BROCK LESNAR’S “HERE COMES THE PAIN” … ICE-T AND COCO’s SEX SECRETS … TEEN SENSATION TAYLOR MOMSEN … UFC BAD BOY NICK DIAZ … THE WALKING RIOT MISSY HYATT if you’re not subscribing, you’re missing something … and by the ways cheapos, it’s FREE! Yes, absolutely 100 percent FREE! What are you waiting for? Check it out HERE!