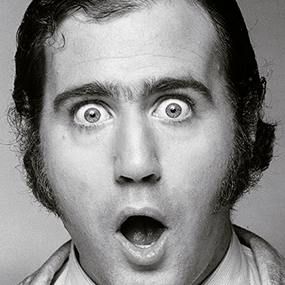 Leave it to the people he left behind, the comedian can still garner publicity with the best of ’em … years after his death!

Andy Kaufman is alive and well. At least, that’s the latest claim to come from his family. Of course, no pictures or videos (or, hey … ANDY!) have been produced to support such a claim, but why quibble over small details like those?

According to THE HOLLYWOOD REPORTER:

A mysterious woman’s claims that she is the daughter of Andy Kaufman have helped to revive long-standing rumors — fueled in life by Kaufman himself — that the comedian may have faked his own death.

The far-fetched admission, reported first by The Comic’s Comic and Defamer, occurred Monday night at the Andy Kaufman Awards, held annually at the Gotham Comedy Club. The woman was introduced by Michael Kaufman, Andy’s brother, who first explained how years ago he’d discovered an essay in which Andy detailed plans to fake his death. Official records state the Taxi star died in 1984 at age 35, of lung cancer. Were he alive today, Kaufman would be 64 years old.

“I witnessed the entire thing and I can tell you without a doubt this was not a prank,” says Al Parinello, a lifelong friend of the comedian who produces the awards. Parinello relayed to The Hollywood Reporter how Michael, whom he describes as “accountant-like” in demeanor and not prone to mounting hoaxes, followed instructions in the essay to meet his brother at a specific restaurant on Christmas Eve, 1999.

Michael did so, he said, whereupon a man he did not know walked up to him and handed him a typed letter. The letter, which Michael read for the crowd on Monday night, was allegedly from Andy, who wrote that “everything was great in his life and he just wanted to get away from being Andy Kaufman,” Parinello says. The letter also stated that the comedian, famous for his bizarre alter-egos like cantankerous lounge singer Tony Clifton, had fallen in love with a woman and that the couple were raising a daughter together.

Michael then explained that the daughter, now 24, had made contact with him several months prior, and had subsequently agreed to accompany him to the awards. The woman then shyly took the stage, wearing a black dress covered in a pattern of colored bows.  No one in attendance seems to know the woman’s first name, though Parinello says she went by the surname “McCoy,” a name Kaufman used when checking himself into hospitals.

An account of the event posted to Facebook by one audience member says the woman then told the crowd that her alleged father “is alive” and that “the passing of [their] father [Stanley Kaufman] this July made him want to reach out” to his brother. The account calls the moment “as real as any reality that I’ve seen.” Another account said the room fell silent during the presentation and that one woman “burst into tears” as Michael read the letter.

According to Ed Cavanagh, showroom manager at the Gotham Comedy Club, “You could see by the look on [Michael’s] face that it had an emotional impact on him.” Asked whether or not he believes the woman’s story, Cavanagh adds, “I don’t know whether somebody is perpetrating something on [Michael] or not. I’m truly 50-50 on this one.”

Parinello, who met Kaufman when they were undergrads at Grahm Junior College in Boston, says he is convinced of the story’s veracity, even though he attended Kaufman’s funeral and saw his body with his own eyes.

“It was a closed casket,” he recalls. “Only the family [and myself] actually saw the body.” How then does he reconcile Monday’s events? “Andy was an aficionado of meditation,” he explains. “One of the things Andy was taught at the highest level was a process where one could slow down his breath to a point where you can literally fool anyone that you may be dead when in fact you are alive. So that’s the one thing that Michael checked for.”

Adds Parinello: “It was a very formal affair — it wasn’t as though they could prod or anything else. They were simply in the room and saw Andy laying in a coffin.”

Contacted by THR, Michael Kaufman said that the woman claiming to be Kaufman’s daughter was impossible to reach, for reasons he would explain later. He then excused himself, saying he had a dinner date with his wife.

So? What’s your opinion on all this? We’re HustleTweeting right now about Andy Kaufman, and you’re more than welcome to join the conversation by following THE HEYMAN HUSTLE and telling us what YOU think RIGHT F’N HERE! We got the whole social media thing covered, so check out the Hustle’s Ultra High Quality You Tube Channel, with exclusive videos featuring OUR WORLD EXCLUSIVE WITH MIKE TYSON … BROCK LESNAR’S “HERE COMES THE PAIN” … ICE-T AND COCO’s SEX SECRETS … TEEN SENSATION TAYLOR MOMSEN … UFC BAD BOY NICK DIAZ … THE WALKING RIOT MISSY HYATT if you’re not subscribing, you’re missing something … and by the ways cheapos, it’s FREE! Yes, absolutely 100 percent FREE! What are you waiting for? Check it out HERE!