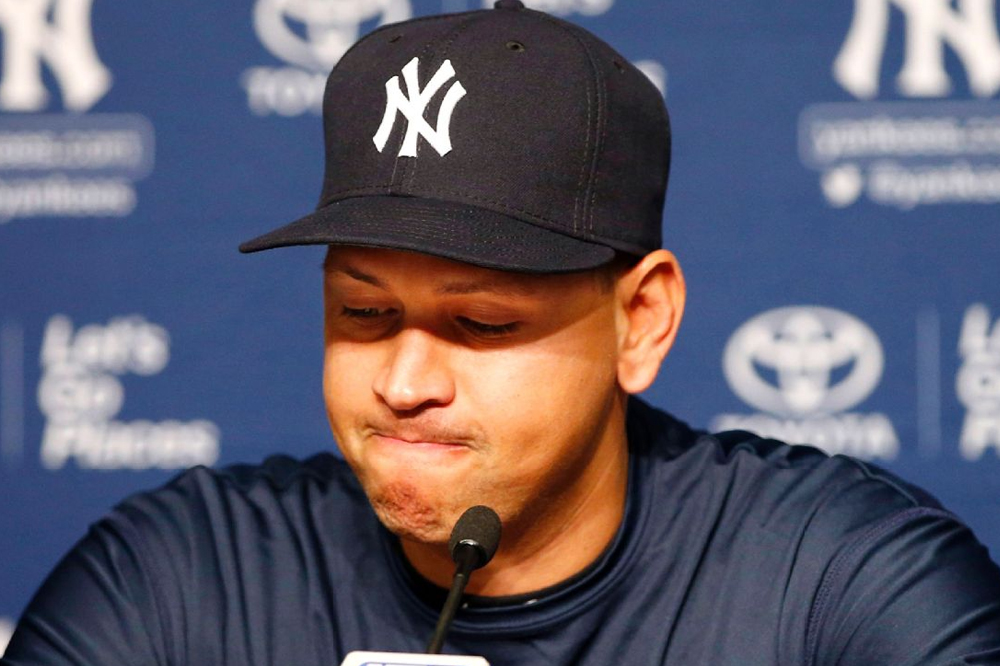 The Inside Story on The Deal to Retire Alex Rodriguez!

According to and confirmed by multiple sources, New York Yankees Managing General Partner Hal Steinbrenner sent AROD a text last Wednesday suggesting it was time for the team and its superstar player (who has been in a terrible slump and has been benched lately) to meet face-to-face.

Also according to and confirmed by multiple sources, that meeting did indeed take place, later that day, in a room off the clubhouse in Yankee Stadium. Steinbrenner told Rodriguez, 41, the team was going to release Rodriguez this coming Friday, even though it meant having to continue paying him on his $275 million contract.

Steinbrenner told Rodriguez, that the Yankees had made a significant change of course and were now looking to the future. A fading slugger hitting .204 this season simply did not fit in.

Later that day, Steinbrenner and Rodriguez met again. On Thursday morning, there was a third session. And by then, Steinbrenner also had a proposal for Rodriguez to consider: Instead of sitting on the bench for the rest of the season, doing nothing, Rodriguez would be given his release by the Yankees and then appointed a special adviser and instructor for the club.

He would get the $27 million still owed him for this season and for 2017, but he would no longer be playing.

For Steinbrenner, the proposal was a way to get something positive out of the money the Yankees still owed Rodriguez and to keep things on good terms with a player with whom the team had had far too many recriminations in the past. The other course of action — simply not playing him again in 2016 and then unceremoniously cutting him loose — had the potential to anger Rodriguez and lead to more unhappy headlines.

Later that day, Rodriguez told Steinbrenner he needed a couple of days to mull it over, and on Saturday he accepted the offer. Then, on Sunday, in a tearful news conference at Yankee Stadium to announce his decision, Rodriguez said he had taken it to mean that his remarkable playing career would end this Friday, when the Yankees play at home against Tampa Bay.

“The last four weeks have not been fun,” Rodriguez said. “It’s been very painful and embarrassing to sit on the bench. It’s been awkward. So, from that sense, I’m very happy that we found a solution.”

Although it is always possible that some other team, at some point, may ask Rodriguez if he would like one more shot at playing, the game on Friday appears set to be his final one after 22 seasons, a number of which he spent as, perhaps, the best player in the game.

He won three American League Most Valuable Player Awards over the course of his career and has more than 3,000 hits and nearly 700 home runs. However, he also left himself with a legacy as one of the game’s most notorious users of performance-enhancing drugs.

As with almost everything involving Rodriguez’s dozen seasons in New York, his departure will be a little complicated. Had he simply announced that he was retiring, no strings attached, the Yankees would not have had to pay him the money still owed him under his contract. By instead giving him his unconditional release, they will have to do so.

After his release, Rodriguez will then sign a new contract for his adviser role that will pay him a small amount in addition to the $27 million he was already owed. That contract will run through December 2017, when his current 10-year deal with the team would have ended anyway.

Financially, at least, Rodriguez is coming out ahead.

“He can negotiate the heck out of it,” General Manager Brian Cashman said of Rodriguez’s discussions with Steinbrenner in recent days. “He negotiated probably the greatest sports contract in the history of sports, so he has a lot of gifts. He doesn’t just play baseball.”

For Rodriguez, who will head home to Miami after Friday’s game and take up his new responsibilities in spring training, the choice was clear: Hang on stubbornly through the rest of this season, be released and then try to catch on with another club for 2017, or accept the Yankees’ offer and remain in the good graces of a team he loves being associated with. Given those two options, Rodriguez chose to stay put.

“I was incredibly humbled and flattered that he wanted me to spend time with the next generation of Yankees,” Rodriguez said of Steinbrenner. “That’s a role I’ve enjoyed my entire career.’’

Cashman has long regarded Rodriguez as someone who can be a good mentor to other players and a skilled evaluator. He noted that Rodriguez had once told him about a promising high school player named Manny Machado, now an All-Star with the Baltimore Orioles, and had come away from a minor league rehabilitation assignment raving over Greg Bird, the Yankees’ top hitting prospect.

“He loves that aspect of the game,” Cashman said. “I think he wants to be an owner one day, but anything below that in a field uniform, he’s already plug ’n’ play. He’s exceptional on the baseball end in terms of the teaching and evaluating side. He always has been.”

Cashman said that Rodriguez would remain free to do broadcast work and that, should a team at some point seek his services as a player, the Yankees would not stand in the way. But Cashman seemed skeptical as to whether that might happen.

Meanwhile, Rodriguez sounded like a man who had accepted that his final game was less than a week away.

“This is a tough day,” he said in words he acknowledged had been prepared the night before. “I love this game, and I love this team, and today I am saying goodbye to both.”

Rodriguez spent 13 years with the Yankees, who acquired him in a blockbuster deal in February 2004 that sent Alfonso Soriano to the Texas Rangers in exchange.

He went on to win two of his three M.V.P. Awards in pinstripes, but few days went by without Rodriguez creating distractions with some type of malfeasance, whether it was his strained relationship with his teammate Derek Jeter, the revelations of Rodriguez’s drug use or his notable failures in numerous Yankee postseasons.

Still, the Yankees and Rodriguez now think that his flaws, along with his accomplishments, can be turned into assets in his work with young players.

“A guy like me who has been to hell and back and made every mistake in the book, I think they can learn equally from all the mistakes that I’ve made and hopefully not make them,” he said.

Three years ago, the notion that the Yankees would even consider Rodriguez for the role they are now giving him would have been ridiculed. At the time, he was at war with the organization and with Major League Baseball over his alleged links to the Biogenesis doping scandal.

Rodriguez filed several lawsuits and at first battled the record suspension that was levied against him in August 2013 by Commissioner Bud Selig, but he ultimately relented. He accepted a ban for all of 2014; made peace with baseball’s incoming commissioner, Rob Manfred; and returned to the Yankees in 2015 as a contrite and dedicated teammate.

To considerable surprise, he also slugged 33 home runs last season and drove in 86 runs. But this season, his numbers dwindled sharply. Through Sunday, he was batting just .204 with nine home runs and 29 R.B.I.

He also has 696 career homers, which means that by departing now, he will almost certainly fall short of 700 — a figure only Babe Ruth, Hank Aaron and Barry Bonds have surpassed. Still, Rodriguez said he was at peace with his decision, and with his place in baseball history.

Of course, we’re HustleTweeting about AROD, and you’re more than welcome to join the conversation on the Hustle Twitter HERE and also on our hyper-interactive Facebook page HERE!