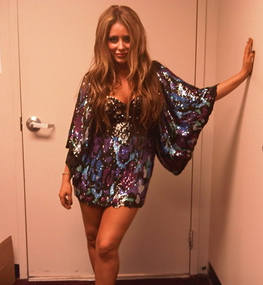 with (another Heyman Hustle Hottie) Holly Madison, and already the winds of controversy have blown into Sin City!

Aubrey’s debut, which was met with critical praise, has been upstaged by the fact that she is canceling her Tuesday night performance.

Why? Because someone leaked out photos and a video of Aubrey (and Holly) topless in the show, and the former Danity Kane lead singer is fuming about it!

In a video that Aubrey distributed to the web, the once-blonde bombshell appeared with unbrushed hair and no makeup. She lambasted websites for posting the photos, and then removed her shirt, revealing a see-through pink bra.

(OK, we’re kidding. Come on, lighten up a little. Plus, don’t blame me. It was Paul Heyman’s joke)

“This is what I look like with my natural hair, uncombed,” Aubrey stated,
“I just got out of bed, and this is what my body looks like naturally.”

It must be noted that hundreds of independent sources verified this statement as accurate.

Oh come on, we’re just kidding. Lighten up just a little. It was a joke. You know, just to make everyone reading this smile. Especially you, Aubs. We love you.

Plus, don’t be mad at me. It was Paul Heyman’s joke anyway.

By the way, you can check out Aubrey openly flirting with our own Hustler De Tuti Hustlers in one of the greatest episodes from season one of THE HEYMAN HUSTLE by clicking THIS LINK

OK, back to see-through Aubrey wearing her heart on her sleeve, so to speak.

“There you go, everyone, you can look at all the photos you like,” Aubrey exlaimed, although obviously she’d like you to pass up on the pics to be honest, “Yes, any cover that any celebrity has ever done has been retouched. But this is what I look like without my top on, and any photo that you see, especially the one from ‘Peepshow’  was an hour and a half into me performing while I was hitting a high note onstage.”

“Be comfortable with who you are,” Aubrey concluded, “Don’t let anyone make you feel bad about your body.”

To See The Entire Uncensored Gallery of
Heyman Hustle Hotties Aubrey O’Day and
Holly Madison in Peep Show, Click on the Pics Below! 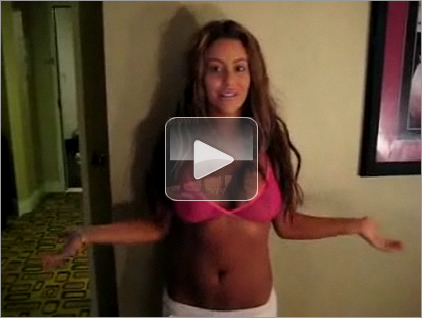