BEHIND THE SCENES HUSTLE EXCLUSIVE! The Inside Story on the Controversial "Bert and Ernie" New Yorker Magazine Cover 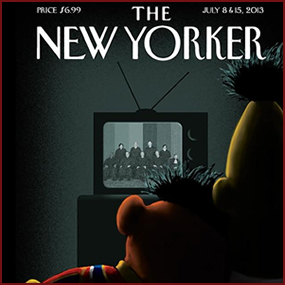 “Moment of Joy” becomes one of the most talked-about illustrations in the storied history of the popular periodical!

In celebration of the Supreme Court’s decision allowing gay marriage, New Yorker magazine put Sesame Street’s Bert and Ernie on the cover … together … embracing on the couch … gazing at a scene featuring the Supreme Court Justices on their television set.

Drawn by Arizona-based illustrator Jack Hunter, the picture is titled “Moment of Joy.” Producers for the children’s show said they wouldn’t be commenting on the portrayal. In 2011, the producers did just that, as they then addressed rumors about the characters’ sexuality, insisting Bert and Ernie are just friends.

The cover art was actually a re-purposed rendering that Hunter created last May, after President Obama told ABC’s Robin Roberts that he supported gay marriage.

In the 2012 version, the “Sesame Street” characters are positioned in the same spot but instead of the nine Supreme Court Justices on their TV, there is a screen grab of President Obama from the interview.

The artist commented last year that he’s “certainly not the first person to speculate about Bert & Ernie’s more personal and private relationship. I thought they were well suited to represent how a lot of gay couples must have felt hearing Obama’s comments (to ABC’s Roberts) … after all, they’ve been together for almost 50 years … as ‘just friends’ or otherwise,” Hunter said last May.

Is this conversation really happening? About muppets?

During his interview with Roberts on May 9, President Obama said “I’ve just concluded that … for me personally, it is important for me to go ahead and affirm that … I think same-sex couples should be able to get married.”

Given their on-screen closeness, Bert and Ernie’s relationship has gone under the microscope but producers have denied anything but a platonic rapport. The fact they felt compelled to comment in the first place is amazing, but a subject for another discussion. When defending (are they really defending? another topic, another day) themselves in 2011, the “Sesame Street” producers stated “Bert and Ernie are best friends … They were created to teach preschoolers that people can be good friends with those who are very different from themselves…they remain puppets, and do not have a sexual orientation.”

Of course, we’re HustleTweeting about Bert and Ernie, and you’re more than welcome to join the conversation by following us on twitter HERE or write us directly at hustleoncrave@gmail.com  Hey, have you checked out the Hustle’s Ultra High Quality You Tube Channel, with exclusive videos featuring OUR WORLD EXCLUSIVE WITH MIKE TYSON … BROCK LESNAR’S “HERE COMES THE PAIN” … ICE-T AND COCO’s SEX SECRETS … TEEN SENSATION TAYLOR MOMSEN … UFC BAD BOY NICK DIAZ … THE WALKING RIOT MISSY HYATT if you’re not subscribing, you’re missing something … and by the ways cheapos, it’s FREE! Yes, absolutely 100 percent FREE! What are you waiting for? Check it out HERE!