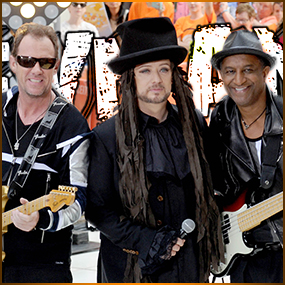 Boy George and Culture Club are back, 12 years after they last toured America and 16 years since they put out a new album. The reunited band played three old hits on The Today Show’s “Throwback Thursday” concert series, as a promotion for their reunion tour, which kicks off July 17 in Vancouver and hits the Beacon Theatre in New York on July 27 and 28.

One Culture Club member didn’t make it to the “Today Show”: Drummer Jon Moss, who will perform on the tour, got laid up with back problems. Fans surely noticed the absence of Moss because George’s doomed romantic relationship with the drummer played a key role in the band’s original breakup in the ‘80s.

George says that’s all blood under the bridge, though he doesn’t sugar coat on-going issues between the members. “We get on each other’s nerves,” he says. “It’s like going home for Christmas with your family. There’s always going to be something said that hurts you. But you know what? I love these fools.”

The group tested several short-lived or aborted reunions before. George says everything changed for him relatively recently.

“Only in the last five years have I really grown up,” admits the star, now 54 years old. “I’d been winging it before.”

The singer says he always had “one foot in, one foot out” of the band, even during their heyday. “I had to go off to do my own thing, to get my confidence as a writer, and a performer,” he says.

Boy George and his band mates have already completed a full album, “Tribes,” set to arrive in early 2016.  It will be the band’s first since 1999’s “Don’t Mind If I Do,” a work which bombed in the U.K. and never even came out in the United States. George says the new songs recall old Roxy Music, T-Rex and Sly Stone. One cut even uses Sly as its main character.

Of course, we’re HustleTweeting about Boy George and Culture Club, and you’re more than welcome to join the conversation by following The Heyman Hustle on Twitter HERE! You can also post your thoughts on our Facebook page HERE!  If you feel compelled to write us, please do so at HustleOnCrave (at) Gmail.com