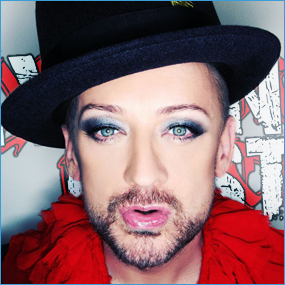 The Culture Club Lead Singer Is Moving From London to L.A., and Bunim/Murray is Documenting The Entire Change of Scenery

Boy George will star in a brand new reality series chronicling his move from London to Los Angeles, according to Deadline. The Culture Club lead singer and his manager Paul Kemsley are teaming Bunim/Murray Prods and producer Cindy Cowan to develop a docuseries that lets viewers in on George’s big move to the States after all these years. The trio will exec produce along with Bunim/Murray’s Gil Goldschein and Jeff Jenkins. Shooting will begin this summer when George arrives in L.A. “If Marge Simpson met Dolly Parton and went dancing with Ziggy Stardust, it wouldn’t come close to what you’ll see,” George stated.  “Why now — why not? Why me — who else?”

Of course, we’re HustleTweeting about Boy George and you’re more than welcome to join the conversation following The Heyman Hustle on Twitter HERE! You can also post your thoughts on our Facebook page HERE!  If you feel compelled to write us, please do so at HustleOnCrave (at) Gmail.com