AMC Breaks Bad with The Confession of Walter White 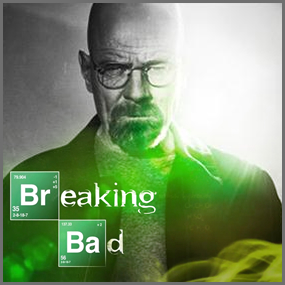 The third episode of the final season of BREAKING BAD was so tense, so riveting, the entire staff here at THE HEYMAN HUSTLE has been buzzing about it since last night. Where do we even begin? Walter White (Bryan Cranston)’s insanely brilliant threat to Hank (Dean Harris)? Jesse (Aaron Paul)’s meltdown? All the sub-plots and mis-directions? After EPISODE ONE OF THIS SEASON … and EPISODE TWO OF THIS SEASON … “Confessions” is must-see TV!

OK, let’s take a shot at explaining what happened. In an attempt to lure Junior (RJ Mitte) out of the deceptive clutches of his aunt Marie (Besty Brandt), Walter White decided to come clean with his the truth about the fact Walt is once again battling Cancer. To further implement his plan to stay out of Hank’s accurate accusations, Walt and Skylar (Anna Gunn) met up with Hank and Marie at a Mexican restaurant for a little family dinner and light conversation. Of course, the festive atmosphere at the Mexican joint completely betrayed the nature of the sitdown.

After firmly requesting that Hank and Marie leave their children alone, Walt turned to leave, but first he gave his brother-in-law his video confession. Only it wasn’t a truthful confession. This is where you can say “Holy Shit!”

Actually, we’ll say it for you. “Holy shit!”

Walt’s confession? Well, he says that, yes, he’s been cooking meth for the past year … but  he was only doing so under Hank’s threatening orders. Uh huh. Bombshell plot twist. Walt even cites that he was forced to pay Hank’s staggering $177,000 medical bill. Not only is that last detail true, it’s also a clever little wrench in the works that could lead doubters to believe Walt’s well-thought-out web of lies. This show is awesome.

Meanwhile, Saul Goodman guides Jesse out of the police’s clutches and straight into the middle of the desert for a talk. Walt told Jesse a perfectly crafted story suggesting that his former partner start a fresh new life somewhere far away from Albuquerque, New Mexico. Jesse quickly saw through Walt’s attempts to get him to leave town, but the drugged-out Jesse realized that a new life, particularly in Alaska could be exactly what he needs. While waiting for his date with the man who specializes in creating new identities, Jesse realized that Huelle stole his pot away from him.

So now Jesse realizes that this is not the first time one of Saul’s men has stolen from him and in a fit of rage, Jesse abusively confronts Saul about the ricin cigarette. Now it’s Saul who confessed, “I’m sorry. Yes okay. I had Huell lift your cigarette, but Walt made me. He told me he was helping you. He was saving you. I never would have agreed to it if I knew what he was going to do. Jesse, you’ve got to believe me. I never wanted any of this.”

Of course, we’re HustleTweeting about the final season of BREAKING BAD, and you’re more than welcome to join us by following us on twitter HERE or write us directly at hustleoncrave@gmail.com  Hey, have you checked out the Hustle’s Ultra High Quality You Tube Channel, with exclusive videos featuring OUR WORLD EXCLUSIVE WITH MIKE TYSON … BROCK LESNAR’S “HERE COMES THE PAIN” … ICE-T AND COCO’s SEX SECRETS … TEEN SENSATION TAYLOR MOMSEN … UFC BAD BOY NICK DIAZ … THE WALKING RIOT MISSY HYATT if you’re not subscribing, you’re missing something … and by the ways cheapos, it’s FREE! Yes, absolutely 100 percent FREE! What are you waiting for? Check it out HERE!