We're Half-way Into The Final Season of Breaking Bad ... and it's getting better with every single episode! 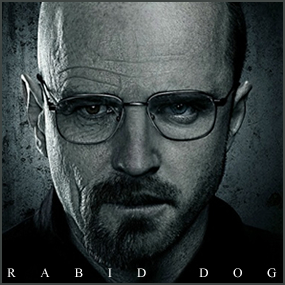 An in-depth review of “Rabid Dog” … and an examination of where the series may be headed … and the way producers have masterfully arced television’s most must-see drama!

In many ways, the most important moment in the “Breaking Bad” episode entitled “Rabid Dog” isn’t apparent the first time you watch the episode. But for those of us who are obsessing over the final season of this great series, there’s a lot to digest in this mid-way-thru-the-season episode. Walt arrives home to find Jesse’s stolen car abandoned in his driveway, with the driver-side door still hanging open. That was quite tense. And so was the moment Walt draws his gun and searches the house for his former partner, only to learn that Jesse is just not there. There’s the heart-pounding moment Hank stops Jesse from torching the house by saying, “You really wanna burn him down? Let’s do it together.”

But the moment to notice is when Jesse wakes up in Hank and Marie’s guest room, after finally agreeing to give all his secrets up to the DEA, and sees a family photo of Walt sitting on a nearby shelf, dressed up like Santa Claus for Christmas. There’s something about the genuine joy in Walt’s eyes that absolutely destroys, and you see it in Jesse’s reaction.

Saul Goodman, for his part, suggests that perhaps it’s time to think about Jesse as “an Old Yeller type situation,” one where unpleasant decisions become a reluctantly accepted reality. “Everybody loved that mutt, but one day he showed up rabid. And little Timmy … for Old Yeller’s own sake … had to, well, you saw the movie.” Saul’s mincing of words upsets Walt, which shows Walt’s character is going off into uncomfortable space as well, considering how Walt has justified murder with colorful language throughout the series.

There’s a reason Walt is such a good manipulator, and it’s not just how well he lies to other people. There are those who would say it’s also how well he lies to himself. That’s the reason he’s still telling Skyler ridiculously transparent lies about how the living room just happened to get soaked in gasoline even after she signed on as his willing co-conspirator. When Walt Jr. is out of earshot and they’re alone, Walt’s denials continue to come almost out of muscle memory. It’s like Walt just doesn’t know how to stop pretending, or how to stop splitting himself into two. He doesn’t just put up the facade of being a decent person for the benefit of others. He does it because he needs to believe he’s still the upstanding man that Walt Jr. still thinks he is, albeit one who believes he has been compelled to make tough, uncomfortable decisions for his family’s sake.

The great irony of argument over whether or not to kill Jesse is that Jesse seems convinced Walt is already out for blood, while it’s Walt who is actually the only one still trying to protect him. Saul and Skyler think Jesse should be dead.

That’s because “Heisenberg” has become the reality for Jesse. “He’s the devil. He’s smarter than you. he’s luckier than you. Whatever you think is supposed to happen, the exact reverse opposite of that is going to happen.” Dude is Kaiser Soze!

Here’s a theory. Walt’s apparent decision to put a hit out on Jesse is just he next step in Walt’s inability to stop becoming Heisenberg. After all, Heisenberg isn’t the one who wanted to protect Jesse. It was the man in the Santa suit who loved and protected and looked after Jesse. And the moment where he decides to cross this line could prove to be the final death throes of what was left of that man. Pretty f’n deep, huh?

Calling in Todd’s uncle for the hit also likely set up a confrontation between Jesse and Todd, the two Walter White Guys (like BROCK LESNAR VS CM PUNK is a clash of PAUL HEYMAN GUYS). Jesse is still devastated about the death of Drew Sharp, the little boy who Todd killed because he witnessed their train heist. The cold open for that particular episode involved Drew playing with a tarantula in the desert, and it’s no coincidence that last week, as Walt tried to convince Jesse to leave town, we saw a tarantula creep by on the edge of the screen. Drew Sharp is still there, lingering in the back of Jesse’s mind.

Jesse has just never been very good at being a cold blooded killer, and we could suggest he is more tormented by his own conscience than any other character on the show. Jesse has never been capable of pulling the trigger on his own, but given his fury about the poisoning of Brock, it isn’t difficult to imagine Jesse making an exception for Todd. Here’s where it gets even more tense. That’s not only because of Drew Sharp, but because of how much it might feel like killing Walter White by proxy. Or, perhaps, just maybe, a prelude to actually killing Walter White himself.

Of course, we’re HustleTweeting about Breaking Bad, and you’re more than welcome to join the conversation by following us on twitter HERE or write us directly at hustleoncrave@gmail.com  Hey, have you checked out the Hustle’s Ultra High Quality You Tube Channel, with exclusive videos featuring OUR WORLD EXCLUSIVE WITH MIKE TYSON … BROCK LESNAR’S “HERE COMES THE PAIN” … ICE-T AND COCO’s SEX SECRETS … TEEN SENSATION TAYLOR MOMSEN … UFC BAD BOY NICK DIAZ … THE WALKING RIOT MISSY HYATT if you’re not subscribing, you’re missing something … and by the ways cheapos, it’s FREE! Yes, absolutely 100 percent FREE! What are you waiting for? Check it out HERE!