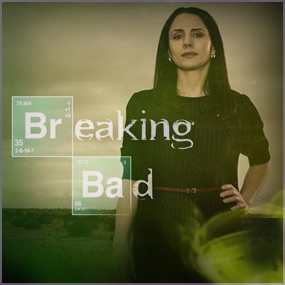 As the iconic series approaches its finale, a pivotal character takes center stage in a riveting episode!

Laura Fraser’s portrayal of Lydia Rodarte-Quayle was a huge hit with HustleTweeters over the weekend, as “Breaking Bad” continued its explosive final season. Lydia’s bloody double cross of Walter White’s former partners Sunday night, played out in an elaborate desert ruse aided and abetted by Todd (played by Jesse Plemons), was a side of her that viewers hadn’t seen up until now.

“She took care of business, then totally cracked up in the end,” stated the Scottish-born Fraser, alluding to Lydia’s orchestrating a massacre.It was shocking because she was unable to look at the bloody bodies as Todd led her away with her eyes closed. And she was the one who made it all happen!

“With that scene, I was like, wow, she’s really getting in there …I felt she was so cold and cutthroat, the way she got involved in the conversation with (Walter White’s ex-partners), saying to him, ‘Why don’t you just use Todd’ … like if he said yes, Lydia would send Todd a text message canceling the massacre,” she stated to the media. “But she totally crumbled in the end being unable to walk through the bodies without looking at them.”

Fraser told the media that she was given no advance warning by series creator Vince Gilligan regarding Lydia’s big scene, which is in keeping with how the show operates, even with series stars Cranston, Anna Gunn (who plays Skyler) and Dean Norris (who plays Hank).

“I feel like her greed is trumping her fear,” the actress said of Lydia’s evolution. “Fear is always with her … she’s in a ‘fight and flight’ mode with a high-pitched frequency. But her brutal, cold side is now coming through more,” Fraser says. “She’s a calculating businesswoman and she’s mildly sociopathic.”

There are only six episodes of “Breaking Bad” remaining, and Fraser says the show’s writers will give Lydia a big sendoff.

“I love it,” she says of her character’s fate. “It’s the perfect ending for Lydia.”

Of course, we’re HustleTweeting about “BREAKING BAD” and you’re more than welcome to join us by following us on twitter HERE or write us directly at hustleoncrave@gmail.com  Hey, have you checked out the Hustle’s Ultra High Quality You Tube Channel, with exclusive videos featuring OUR WORLD EXCLUSIVE WITH MIKE TYSON … BROCK LESNAR’S “HERE COMES THE PAIN” … ICE-T AND COCO’s SEX SECRETS … TEEN SENSATION TAYLOR MOMSEN … UFC BAD BOY NICK DIAZ … THE WALKING RIOT MISSY HYATT if you’re not subscribing, you’re missing something … and by the ways cheapos, it’s FREE! Yes, absolutely 100 percent FREE! What are you waiting for? Check it out HERE!