BREAKING NEWS: Is Derek Jeter The Last Yankees Captain EVER? 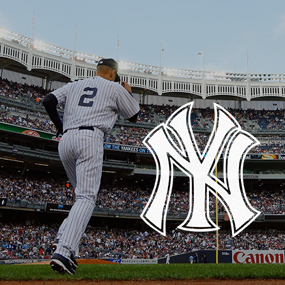 The Bronx Bombers’ GM Throws a Heavy Curve Ball at the Media During Spring Training!

Yankees General Manager Brian Cashman had the press corps buzzing when he offered the opinion that not only should Derek Jeter‘s number “2” be retired in Monument Park at Yankee Stadium by the world’s most famous baseball team, but “the captaincy should be retired” with it. Cashman opined about the subject while appearing on ESPN Radio’s “Lupica” … and he was willing to go deeper than just the sound bite, too.  “As far as I’m concerned … and I’m not the decision-maker on this … that captaincy should be retired with No. 2,” Cashman said. “I wouldn’t give up another captain’s title to anyone else.”

With no obvious choices on the current roster, the Yankees don’t appear to have any plans to name a new captain any time soon. That is not a surprise, given that the club waited more than seven years after Don Mattingly retired to name Jeter as the 16th captain in team history. Cashman believes Jeter was “so perfect” for the role, although he acknowledged that the ultimate decision rests with team ownership, not the GM.

“We have a number of different people that are very strong leaders and high-quality individuals,” Cashman said after the Yankees’ win over the Pirates. “That doesn’t mean you have to put a ‘C’ on it.”

“Derek is a once-in-a-lifetime player that we’re lucky we had,” Cashman added. “But he’s not here now; he retired. There’s nothing to look back on; it’s now looking forward. The game goes on. New people step up and take on different roles of importance on the club.”

Jeter was named captain on June 3, 2003, more than seven years after earning the full-time shortstop job. He won five World Series rings, collecting 3,465 hits, the most by any Yankee.

His leadership in the clubhouse was also legendary, although he rarely showed it publicly. When something needed to be said to a teammate, he would do it behind closed doors in the clubhouse, typically choosing to lead with his actions.

Hey, how about A-Rod?

We’re also HustleTweeting, right now, about Derek Jeter, and you’re more than welcome to join the conversation by following the Hustle on Twitter HERE or write to us directly at hustleoncrave@gmail.com Hey, have you checked out the Hustle’s Ultra High Quality You Tube Channel, with exclusive videos featuring OUR WORLD EXCLUSIVE WITH MIKE TYSON … BROCK LESNAR’S “HERE COMES THE PAIN” … ICE-T AND COCO’s SEX SECRETS … MMA BAD BOY NICK DIAZ … the list goes on and on, so if you’re not subscribing, you’re missing something … and by the ways cheapos, it’s FREE! Yes, absolutely 100 percent FREE! What are you waiting for? Check it out HERE!