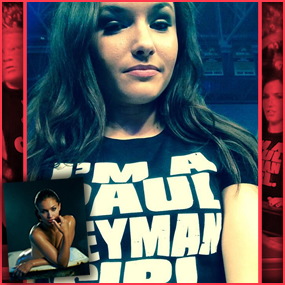 When Brock Lesnar got into a Rumble with The Big Show on WWE Monday Night RAW, a vision of beauty appeared in the front row. Instantly, a #PaulHeymanGirl became a globally trending sensation! 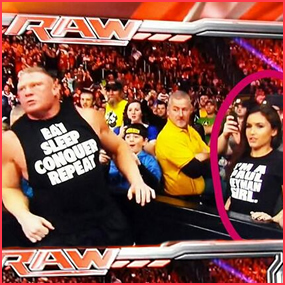 When Brock Lesnar got into a Rumble with The Big Show on WWE Monday Night RAW, a vision of beauty appeared in the front row. Instantly, a #PaulHeymanGirl became a globally trending sensation!

It all happened in an instant. Our very own Hustler De Tuti Hustlers Paul Heyman was ringside in Dayton, Ohio during the live telecast of WWE Monday Night RAW. In a tense moment, The Big Show gut wrenched Brock Lesnar and threw him from the ring. Right there in the front row, for all of two seconds, was a #HustleBootyTempTats newcomer named Brit Bliss. Within a minute, she was trending across the world on Twitter.

In today’s age, that’s all it takes.

Brit is a twenty five year old model-on-the-rise from Columbus, Ohio who showed up at RAW with the exquisite fashion sense of wearing a PAUL HEYMAN GIRL T-SHIRT, and she left a globally-trending international superstar. The gorgeous petite brunette now has a legion of fanatical fans, aching to know the next time she’s showing up, either in her #PaulHeymanGirl shirt, or to model #HustleBootyTempTats

By the way, we’re not supposed to be telling you this, but remember last year, when THE HEYMAN HUSTLE presented the TOP 15 #HustleBootyTempTats UBER-BABES? Well, the #HustleBootyTempTats phenomenon has pushed it to 25 this year, and now we’re going to put the uber-babes to a vote! So, if you’d like to vote for Brit, you’ll be able to do so later today when we officially announce and launch this year’s contest. You’ll be able to vote for Brit HERE!

But don’t let the other uber-babes know. We’re not supposed to tell you about this yet. But we just felt we had to. We keep staring at Brit’s pics, and they’re just … um … Bliss-Full!

Of course, we’re HustleTweeting about Brit Bliss, and you’re more than welcome to join the conversation by following THE HEYMAN HUSTLE on Twitter HERE or write to us directly at hustleoncrave@gmail.com  Hey, have you checked out the Hustle’s Ultra High Quality You Tube Channel, with exclusive videos featuring OUR WORLD EXCLUSIVE WITH MIKE TYSON … BROCK LESNAR’S “HERE COMES THE PAIN” … ICE-T AND COCO’s SEX SECRETS … TEEN SENSATION TAYLOR MOMSEN … UFC BAD BOY NICK DIAZ … THE WALKING RIOT MISSY HYATT if you’re not subscribing, you’re missing something … and by the ways cheapos, it’s FREE! Yes, absolutely 100 percent FREE! What are you waiting for? Check it out HERE!

CLICK ON THE PICS BELOW TO SEE THE VERY FIRST OFFICIAL “BEST OF”
PHOTO GALLERY FEATURING #PAULHEYMANGIRL BRIT BLISS!